Kill Goku, cause as much destruction throughout the entire universe.

Broly first appears in the eighth Dragon Ball Z movie, Broly - The Legendary Super Saiyan. In it, a mysterious Saiyan named Paragus approaches Vegeta, and requests that he come and be the ruler of New Vegeta, a planet for any Saiyans who survived Planet Vegeta's destruction. Paragus then tells him, in order to persuade him, that he needs his help fighting the Legendary Super Saiyan, who had been destroying planets in the South Galaxy. Vegeta agrees and leaves along with Gohan, Trunks, Krillin, Master Roshi, and Oolong. Once on New Vegeta,

Paragus tells them that there has been another attack by the Legendary Super Saiyan, and Vegeta, along with Paragus' son Broly, goes to investigate. Meanwhile, Goku, who was just told of the Destructing in South Galaxy by King Kai, goes to a planet that was attacked, and can sense that a great power was just there. Goku then goes to Planet Vegeta. He meets Broly, who at the very sight of Goku starts powering up, but Paragus soon uses a mind control device to stop Broly. Paragus tells Goku of Broly's birth, and how he started out with a power level of 10,000, a level which is considered to be elite among adult Saiyans. Goku, who was in the bed next to Broly, constantly cried, preventing Broly from sleeping and creating insanity in the newborn child.

Later, Broly attacks Goku as a restrained Super Saiyan, and is able to best Goku, forcing him to flee, and making Goku realize that it was Broly who was the Legendary Super Saiyan all along. Paragus barely manages to get Broly under control, and reveals that he wants to make Saiyans the rulers of the Universe, using Earth as their home planet. Broly then goes after Goku, but Vegeta jumps in and tries to fight him. After not even scratching him Vegeta uses his most powerful attack, the Big Bang Attack. However, even this proves useless against Broly, and after the attack Broly breaks free of Paragus and turns into a Legendary Super Saiyan. Vegeta falls down in fear, acknowledging Broly's power. Paragus tells the heroes that King Vegeta had ordered the death of Broly as an infant, fearing what he would become. When Paragus asked the king to reconsider, the king blasted him. Broly was stabbed and he, along with his father were thrown into a hole in the ground. When the Planet was destroyed by Frieza Broly was able to protect them with his energy, and Paragus began to plot against the last surviving member of the Saiyan royal family, Prince Vegeta.

Broly continues his rampage, and Goku, realising he is no match, turns Super Saiyan, along with Trunks and Gohan. Even with their combined forces however, they cannot hold their own. Broly quickly takes out Trunks and Goku. Broly then turns his eyes on Gohan, but Piccolo appears and saves him. Meanwhile, Paragus tries to escape, hoping his son will die when a nearby comet hits the planet, but Broly confronts him, having found out about Paragus' attempt to escape. Paragus tries to bluff his way out of the situation, saying that he is "trying to prepare the spacepod so we can escape the explosion". But Broly, unconvinced, knowing that the spacepod is only "built for one person", having discovered his father's intentions, and also desiring revenge against Paragus for brainwashing him earlier and then using him, crushes it, killing Paragus, and then effortlessly flings the crushed spacepod, into the comet. Piccolo tells everyone to give Goku their power, saying that it would be enough to defeat Broly. Everyone does so quickly, all except Vegeta, who's pride doesn't allow him to help Goku. After Goku being beaten around by Broly, almost to death, Vegeta finally gives Goku his power. Goku rushes at Broly, and punches him, and Broly explodes.

Broly reappears in the tenth Dragon Ball Z Movie: Broly - Second Coming. In the beginning of the movie, Broly is shown exiting a spacepod onto earth, and then freezing. The story starts off with Goten, Kid Trunks, and Videl searching for the Dragon Balls. In a small quarrel, Videl slaps Goten, who pretends to cry, which, sounding much like his father, awakened Broly. At night, Videl hears the sounds of explosions, and explores to find Broly. She tries to attack him, but Broly knocks her unconscious with one punch. Goten and Trunks come, and Broly, upon seeing Goten, goes mad, mistaking him for Goku.

Trunks and Goten go Super Saiyan to fight Broly, but are no match. As Goten is fighting, he sees the last Dragon Ball. He gets it and hides behind a waterfall. He tries to summon Shenron, but nothing happens. Luckily for them, Gohan arrives to help them fight. Goten, Videl, and Trunks watch as Gohan fights Broly, but Broly notices them and blasts them. Gohan turns into a Super Saiyan 2 and begins fighting Broly. But Broly turns into his Legendary Super Saiyan form, and quickly outmatches Gohan. Gohan then throws Broly into a pit of lava that had been created in the fight, but Broly emerges, and begins to mercilessly beat Gohan. Videl distracts Broly for a second, and Gohan breaks free, and becomes Super Saiyan 2 again. Gohan then fires a Kamehameha at Broly, who fires his Omega Cannon back at him. Gohan is unable to break through the energy ball, and Goten jumps in with a Kamehameha to help him. Even with their combined powers Broly still pushes them back, and Gohan makes a silent wish that his father could be there. Just at that moment, Goku arrived, and helped them fire their combined Kamehameha, and the family is able to break through the ball of energy and knock Broly into the sun, obliterating him. When Gohan and Goten turn around, Goku is gone.

Broly was stated to have returned one more time in Raging Blast 2's bio for Super Saiyan 3 Broly, it states that Broly survived being thrown into the sun and received a huge Zenkai, obtaining a Legendary Super Saiyan 3 form, Broly returned to Earth but was defeated by the Z Fighters.

A clone of Broly appears in the Dragon Ball Z movie: Bio-Broly. In it, a wealthy man named Jaguar uses his money to create powerful bio-warriors, which he wants to use to reveal that Mr. Satan is a fraud. So he sets up a tournament, however, the Z fighters intervene, and are able to defeat his warriors. So he reveals his most powerful weapon, a clone of Broly himself. Jaguar was able to create him through a frozen blood sample provided by a village priest near where Broly was last fought. Trunks and Goten try to destroy the clone before he is released, however, Broly escapes, and becomes mutated by a mysterious liquid.

Bio Broly tries to kill Mr. Satan, but Android 18 and Trunks try to prevent it, and in the process both get beaten down. Trunks manages to get Broly between some chemical tanks, and destroys the tanks, hoping to destroy Broly. However, this only serves to make Broly even stronger. They escape the factory, and discover that sea water causes the bio fuid to turn to stone, so they use a Kamehameha to blast the sea water at Broly and he falls into the water. He starts to rise, but becomes stone as he does. Trunks and Goten then blast Bio-Broly, obliterating him once again.

The actual Broly is mentioned at the end of the movie, where he is stated to be causing trouble in hell, and Goku and Pikkon are sent to stop him.

Broly's personality is one of an extreme sociopath. He demonstrates uncontrolled rage and shows joy at the idea of destroying and crushing his enemies. Broly often destroys whole planets as a means of intimidation and toys with his victims, such as when he offers them free hits, due to the fact that very few things can harm him. It's strongly implied that most, if not all of his negative traits stemmed from psychological trauma caused by the events of his birth, including his nearly being killed by King Vegeta simply for his power level, bearing witness to/barely surviving Frieza's Genocide of the Saiyans, and eventually being brainwashed by his father.

Broly has the superhuman abilities and energy manipulation powers that many characters in Dragon Ball Z have and he uses a fighting style that to some extent resembles wrestling. Broly can also transform into a Super Saiyan and the Legendary Super Saiyan, a transformation unique to his blood line, due to him being a Super Saiyan by birth. Some of Broly's signature techniques include his Eraser Cannon, a powerful green energy sphere that he throws at his opponents, Trap Shooter, a wave of small green energy pellets that he sends at his foes, and an Energy Shield that he uses to protect himself. It is also implied that he is more than capable of surviving the destruction of an entire planet while in his Legendary Super Saiyan form. In the video game, Dragon Ball Z Raging Blast, it's sequel, and Dragon Ball Heroes, he could enter the form of Legendary Super Saiyan 3.

Broly's standard form. Based on the video games, he at least has decent fighting abilities in it.

Broly is shown to have a tail in concept art, meaning he can transform into a Great Ape by looking at the moon. A Collectible of Broly's Great Ape form has also been released.

A weaker version of the Super Saiyan form with blue hair. This form is used when the mind control crown is on Broly.

Broly's Super Saiyan form, used against Goten and Trunks, he easily defeats them.

Broly's true form, which only he can use. In this form Broly has emerald hair, is twice the size of the average person, incredibly muscular and is much stronger than any normal Super Saiyan. He is also seemingly invulnerable to anything weaker than him.

Broly's Majin form, which appears in video games. He is a Legendary Super Saiyan 3 while in this state. 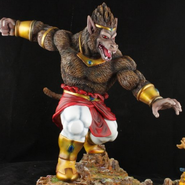 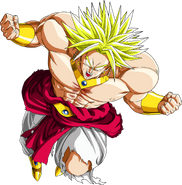 Legendary Super Saiyan 3
Add a photo to this gallery

Retrieved from "https://villains.fandom.com/wiki/Broly?oldid=840586"
Community content is available under CC-BY-SA unless otherwise noted.