Member of the Frieza Force (formerly)

Hanging out with Cheelai and Lemo.
Sparring with Goku (implied).

Be free of his father's control (succeeded).

Broly (Japanese: ブロリー Burorī), is the titular main antagonist/misguided anti-hero of the Dragon Ball Super film Dragon Ball Super: Broly. He is a powerful Saiyan warrior of legend, working for the Frieza Force while used as a weapon to his father, Paragus, to get his revenge on King Vegeta for isolating them on a distant planet for owning even more talent than the latter's son.

He is based on the character Broly from the Dragon Ball Z film Broly - The Legendary Super Saiyan, whom Akira Toriyama decided to induct into Super due to his popularity.

He was voiced by Bin Shimada in the Japanese version, and Vic Mignogna in the English version.

Broly was born around the same time as Goku and Vegeta to Paragus, a trusted lieutenant of King Vegeta. Broly was born as the Legendary Super Saiyan of Universe 7, a Saiyan warrior of tremendous power that appeared once every thousand years (with his Universe 6 counterpart being Kale). Because of his heritage, Broly was born with a power level of 10,000, King Vegeta, jealous of Broly's power level is greater than his son but not willing to waste such potential, sent him away to a frontier planet. During his stay on the planet, he encountered a giant creature that he named Ba. Broly would constantly spar with Ba by dodging its attacks until he ends up befriending it through these constant interactions. Unfortunately, Paragus saw this development as a hindrance to Broly's growth and shot the beast, severing its ear in the process. This event made Ba leave and never trust Broly again. He would wear the severed ear as a green pelt to serve as a memento that he will always be together with Ba.

In one incident, Paragus removed Broly's tail because whenever he transformed he lost control. Paragus also invented a collar to use to keep Broly in submission and from acting out by electrocuting him.

Sometime later, Broly, all grown up, and his father were discovered by a platoon from the Galactic Frieza Army when a Vampa Beetle attacks Paragus and two of the platoon's soldiers, Cheelai and Lemo, Broly defends his father and kills the Beetles. The two are taken to Frieza who is interested in Broly's potential and drafts them into his army in exchange for giving Paragus the means of killing Prince Vegeta.

After gaining new armor, Broly and Paragus make their way to the cantine where Broly sits with Cheelai and Lemo. After she makes a comment on getting rid of the Ba's ear. Broly snaps at her, shocking the whole cantine, before he apologizes. Then Broly becomes aggressive when a Frieza soldier harasses Cheelai and gets in a scuffle with him. But before Broly could do more, Paragus activates the shock collar around Broly's neck, causing him to scream in pain. Then Broly is left amazed as Cheelai stands up to Paragus and then reveals she stole the shock collar remote as he left before crushing it.

Broly goes to the living quaters to eat and drink as he reveals the story of how he and Ba's friendship began and ended and why he wears the creatures ear. Though when Cheelai and lemo try to get Broly to realize Paragus didn't care about and was only using him, Broly firmly tells them to not speak ill of his father, disheartening them both.

Later, as Goku and Vegeta were gathering the Dragon Balls, Frieza's forces arrive at Earth and prepare to attack them. After the two obtained the final Dragon Ball, Frieza's forces land and Broly, with his father's permission, rushes towards Vegeta and begins fighting him. While Broly is able to overpower Vegeta at first, he finds himself outmatched when Vegeta goes Super Saiyan and beats him down. However, Vegeta's transformation only causes Broly to grow stronger and unlock his "Wrathful" form.

However Broly quickly reasserts the upper hand, knocking Goku into a mountain once again. Goku then quickly transforms into a Super Saiyan God and paralyzes Broly long enough to try to talk some sense into him. Initially, Goku's attempt at resolving the conflict peacefully appears to be having an effect, and Broly seems to calm down. However, the effect is only transient, and Broly suddenly loses his composure yet again. He manages to reverse Goku's God Bind technique, paralyzing Goku and reigniting the battle. Goku manages to shake off the effects of the reversed God Bind, and Broly pulls back for a massive punch. Goku is barely able to take it; with some effort, he grabs Broly by the wrist and slams him on the ground with enough force to cause an earthquake.

His father dead, Broly explodes in grief and rage and goes Super Saiyan, increasing his already incredibly immense power to new heights. Going berserk, Broly begins attacking anything in his path and eventually turns his sights on Frieza, causing the tyrant to panic and reluctantly teams up with Goku and Vegeta to fight him. Throughout the fight, Goku realized that Broly was not a bad guy, only fighting them because his unique power was affecting his mental state.

While Frieza became Golden Frieza to hold Broly off, whose power had severely taken a toll on him and was now attacking everything in his path. Goku and Vegeta fuse to become Gogeta and soon after joining the fight too. The power radiating off Gogeta and Broly's fight temporarily shatters reality and lands them in another dimension full of odd landscapes of colors. Going into his Legendary Super Saiyan form, Broly fought Gogeta in a climactic battle but was ultimately overpowered by the fused Saiyan, who had gone into his Super Saiyan Blue form. However, before Gogeta can finish a terrified Broly off, Cheelai uses the Dragon Balls to wish for Broly to be sent back to Planet Vampa, teleporting Broly away just before he could be hit with Gogeta's Kamehameha.

Back on Planet Vampa, Broly is reverted to his base form and is scared and disoriented about what happened. Three days later, it's shown that Cheelai and Lemo have quit the Frieza Force and moved to Planet Vampa with Broly. When they go to check up on Broly to see how he's doing, Goku appears to the planet to deliver Broly some food and also give him a Senzu bean to help him recover. When questioned by Cheelai and Lemo, Goku reveals that he thought he was strong but Broly was much stronger, perhaps even stronger than Beerus himself.  Before departing, Goku offers Broly the opportunity to become a sparring partner and the Legendary Super Saiyan agrees with a smile, having finally found peace. However, Broly is unaware that Frieza is secretly planning to give him the same opportunity in the future of becoming his sparring partner.

This version of Broly is far different from his original incarnation. Whereas the original was an utterly violent, sadistic and almost purely evil monster, this version is soft-hearted and gentle, a trait extremely rare in Saiyans. But due to his father's enslavement and isolated life (with his first and only friend having been driven off by his father), Broly did have trouble interacting with others. Broly was shown to be fiercely protective of Cheelai and Lemo and was willing to protect them, as shown when they were harassed by a Frieza Force soldier, despite a warning from Paragus of consequences, and later on when Goku arrived after their battle. A difference between this Broly and the original was their relationship with Paragus.

While the original Broly took a sadistic enjoyment in torturing Paragus even at a young age and later was shown laughing maniacally while crushing him to death, this version truly cared for him and showed grief and rage when Paragus was murdered by Frieza, allowing him to become Super Saiyan despite Paragus's harsh treatment towards him. Another difference to note is that this Broly was capable of showing fear, while the original always showed rage, sadism, and frustration but never anything else other than shock once Goku surpassed him.

This was shown when about to be killed by Gogeta, Broly was terrified and even after being saved and transported to Planet Vampa, still showed signs of fear from the near-death experience. The key difference between this Broly and the original is their relationship with Goku/Kakarot. While the original despised Goku for disturbing him when they were infants and wanted nothing more in the universe than to murder him, this version only fought against him because Paragus forced him to. When they encounter each other again on Planet Vampa, Broly is cautious at first but when Goku reveals why he visited him (bringing supplies and offering to be sparring partners), Broly accepts with a smile and agrees, something the original would never have done.

Despite his gentle nature, Broly does still enjoy fighting to an extent. Even though he didn't want to fight Goku until his father forced him, he did show some signs of enjoying the battle. The ending further displays this as he agreed to serve as Goku's sparring partner and ends up becoming one of his many rivals. 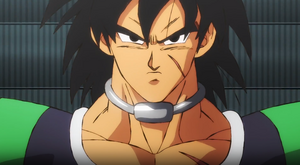 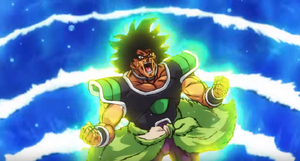 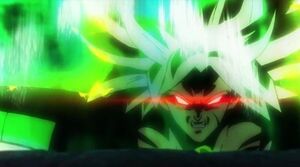 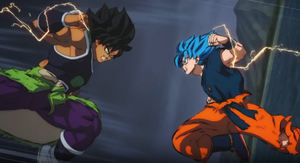 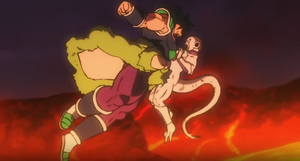 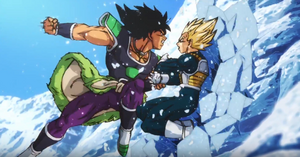 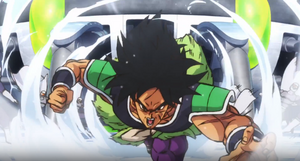 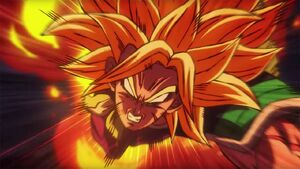 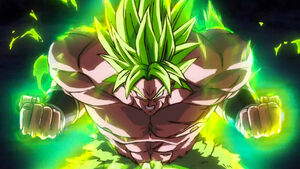 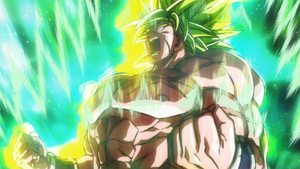