NOTE: This article is about the incarnation of Bronze Tiger from the Arrowverse. The mainstream version can be found here: Bronze Tiger.

Killer for the Triad

Benjamin "Ben" Turner, also known as Bronze Tiger, is an antagonist in the TV series Arrow, where he first appears in Season 2. He was hired to battle Arrow in the episode "Identity". He returned in Season 7 as an minor antagonist-turned-anti-hero.

He was portrayed by Michael Jai White, who also played Gambol in The Dark Knight and S.E.T.H. in Universal Soldier: The Return.

After the destruction of The Glades, the Triad under China White intercepts every delivery of pharmaceutical equipment to the hospital at the Glades. When Arrow investigates, he visits at a warehouse to see China White kill a truck driver who is about to make his delivery to the hospital. When Arrow tries to shoot her, his arrow is blocked by the iron claws of Bronze Tiger. Arrow shoots three more arrows which are all three easily destroyed by Bronze Tiger. Stating that their alliance was built upon Bronze Tiger's eagerness to kill Arrow, China White steals one of the trucks full of medicine and drives away, leaving Arrow and the Tiger to fight. The fight is disrupted when the police arrives at the scene which prompts both Arrow and Bronze Tiger to flee.

At the next highjacked transport, Arrow faces White and Tiger again. They fight Arrow together. During the fight, Bronze Tiger is able to overpower Arrow and almost kills him but Diggle, who has come to make sure the medicine gets to the hospital, takes the truck and forces Tiger to jump out of the way, thereby saving Arrow. Arrow and Bronze Tiger continue their fight between the warehouses shipping crates, where Bronze Tiger uses the surroundings to hide between the crates and then quickly strike at his opponent, thereby slashing Arrow's arm open. Arrow ends this by firing a taser arrow upon arrow at him until one hits the Tiger at the chest. Stating that this won't stop him, Bronze Tiger tries to kill Arrow but is electrocuted when the taser is activated. To help Diggle against China White, Arrow leaves the unconscious Tiger on the ground.

Weeks later, Bronze Tiger is busted out of prison by a new inmate who hid Bronze Tiger's claws inside his own body. Tiger kills 10 prison guards on his way out.

At night, Bronze Tiger meets with the man who planned his escape, Milo Armitage. He tells Tiger that he needs him to steal an dangerous item Tiger is familiar with.

Arrow, accompanied by Roy, track Bronze Tiger down to the abandoned house of Malcolm Merlyn where he and two henchmen are about to steal a prototype of Merlyn's earthquake device. After a short fight Bronze Tiger escapes with the device.

Armitage pays Bronze Tiger 10 million dollars for the device. The deal is interrupted by Arrow, who shoots Armitage in the leg. Though it initially seems that Bronze Tiger has fled, he jumps off a shipping crate and slashes Arrow to the ground. When he is about to kill him, Arrow is saved by Roy who fights and overpowers Bronze Tiger. Even after he is unconscious, Roy keeps beating Bronze Tiger until he is stopped by Arrow who exposes his true identity to Roy.

Back in prison, he is approached by Amanda Waller who recruits him into her Suicide Squad.

As a member of the Suicide Squad, Bronze Tiger alongside Shrapnel, Deadshot and John Diggle are infiltrating Markovia to find Gholem Qadir. Bronze Tiger poses as Diggle's security guard on the first meeting with Qadir. When Qadir threatens Lyla, Bronze Tiger stabs him in the back, killing him. Later, his claws are used to cut the GPS tracker out of Deadshot's head.

After the death of Amanda Waller, Turner was sent to the Slabside Maximum Security Prison with Daniel Brickwell and Derek Sampson. Turner discovered that Brickwell had corrupted all the guards in the prison, including B. Dunbar, and was forced to work with Brickwell out of fear for his life. After Oliver Queen was arrested by the FBI and sent to Slabside, Turner worked with Brickwell and Sampson to attack Oliver since Turner blamed him for his imprisonment. A guard named Peter Yorke, the last clean guard in the prison who was unaware there was corruption, broke it up. Oliver planted a blade on Turner and Yorke sent Turner into solitary confinement as punishment. Turner then warns Oliver he was a dead man when Turner got out.

Days later, Turner was released by Yorke from solitary. Although Turner wanted to attack Oliver for sending him into the hole, Brickwell orders him to stand down. Turner, Brickwell, and Sampson asked Oliver to eliminate Yorke since they knew the guard was going to interfere with their plans for the prison. Turner handed Oliver a knife to kill Yorke. Oliver tried to warn Yorke about Brickwell but the guard refused to listen and insulted Oliver for being a vigilante. Because of this, Oliver confronted Yorke, angered him by saying the names of his family, and stabbed himself with Turner's blade. Once that happened, Oliver panicked claiming that Yorke stabbed him. Yorke denied it, but the guards still had Yorke thrown out even though they saw Oliver stab himself. Turner was secretly relieved to learn that Yorke was still alive, but Brickwell was disappointed since he wanted Yorke dead.

Brickwell promised to set Oliver up in a meeting with “The Demon”. However, Brick set Oliver up, sending Turner and two other inmates to kill him. Oliver managed to subdue the attackers and Turner. Turner then revealed that Brick was holding wrestling matches in the prison, which is why they wanted Yorke gone. Oliver then forced Turner to take him to Brick. Turner believed Oliver was prejudiced towards others and reveals how he saved Lyla's life years ago. This surprised Oliver as Diggle never told him about it. After arriving at the wrestling match, Turner watched Oliver battle Sampson. Later, he, Sampson, and Brick saw Oliver as he was being sent to Level 2 of the prison. Turner was secretly saddened to watch Oliver be sent there. After Oliver and Team Arrow managed to shut down Level 2 for its illegal practices, a new team of guards led by Felton were sent by the federal government to manage the prison after they learned of the fight club. Felton prevented Turner, Sampson, and Brickwell from harming Stanley Dover for being Oliver's accomplice.

One of the guards who was working with Brickwell, B. Dunbar, turned against Brickwell. Turner was then framed for killing Dunbar. Dover stabbed Dunbar multiple times in the showers and planted the murder weapon with Turner's fingerprints on it. Oliver found the knife after Dover begged Oliver to "prove his innocence". After Turner is detained, Oliver realizes that Dover killed Dunbar.

When the FBI decides to release Oliver from Slabside, Oliver went to Turner and promised to grant him his freedom. Turner at first refused to believe that Oliver would honor his promise, but Oliver referenced Lyla Michaels' experience with Turner, saying that maybe he deserved another chance if he tried to reform and become a hero. Although cautious about teaming up with Oliver, Turner later joined him when Ricardo Diaz started a riot in the prison. After Oliver and Turner helped save all the guards in the prison, Turner was returned to his cell after the prison takeover, finding "The Count of Monte Cristo" book left for him by Oliver to read as he did, and acquire hope. Officer Felton, one of the guards whom Turner saved, went to confront Turner to thank him for saving everyone. This led to Turner to contemplate his redemption.

Turner later contacted Laurel Lance to reveal that Emiko Adachi murdered Ricardo Diaz while the prison said Diaz was stabbed by another inmate. Later, Laurel was able to get Ben released on parole. Turner then helped Team Arrow with their final battle against Emiko and the Ninth Circle. Afterwards, Turner would then go on to join A.R.G.U.S. 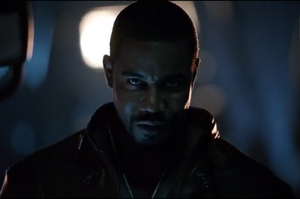 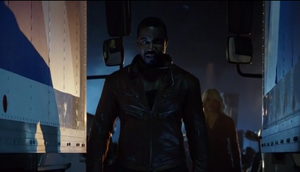 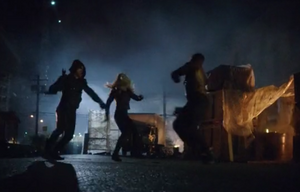 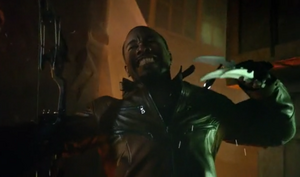 Bronze Tiger gets tasered by an electric arrow 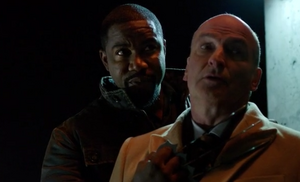 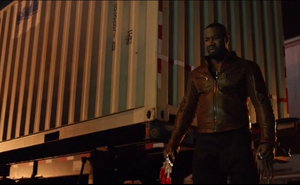