The Broodals are the secondary antagonistic faction in the video game Super Mario Odyssey. They are a group of anthropomorphic and villainous white rabbits who are wedding planners hired by Bowser to help organize his wedding and marriage to Princess Peach.

The Broodals make their debut in the Cap Kingdom. After Mario first lands in Bonneton and teams up with Cappy post his defeat by King Bowser Koopa, he leaps to the roof of Top Hat Tower where he finds the Broodals waiting for him. Introducing themselves, the Broodal Topper explains that they already have what they came to the Cap Kingdom for (Cappy’s sister Tiara) and only stuck around because they were under contract to fight Mario. Topper hops down from the Broodals’ airship and attacks with his headwear, but Mario soon defeats him before heading to the next kingdom.

The Broodals, meanwhile, began scouring the globe for treasured items Bowser needs for his wedding. Although Mario and Cappy manage to track down and defeat every member of the villainous group, the Broodals were still successful in stealing a prized possession from each kingdom they visited. Eventually, all four Broodals are forced to battle the heroes using a giant mech called the RoboBrood in Bowser’s Kingdom. However, using Cappy’s capture ability, Mario destroys the RoboBrood and sends the Broodals flying over the horizon, putting an end to their interruptions during the pair’s quest.

After collecting 250 Power Moons and defeating Bowser and rescuing Peach, Mario and Cappy can travel to the Broodals’ homeland on the Dark Side of the Moon and battle the now-jobless and vengeful Broodals at Rabbit Ridge. If each rabbit is beaten again and their RoboBrood is destroyed a second time, the heroes are rewarded with a Multi-Moon.

Madame Broode is the leader and mother of the Broodals. She uses her pet gold Chain Chomp, Chain Chompikins to attack Mario. She is fought in the Cascade Kingdom and in the Underground Moon Caverns of the Moon Kingdom.

Topper is the second-in-command, who is responsible for the groups' client relationships. He can create duplicates of his hat, which if stacked on his head, can become a hazard to jump over when he spins. He is fought in the Cap Kingdom and Bowser's Kingdom.

Hariet is the pyrotechnic and only female member of the group. She can throw bombs using her hair braid, which splits into two in the rematch. She is fought in the Sand Kingdom and Bowser's Kingdom.

Rango is the bouncer and the oldest Broodal, who can throw his hat like a boomerang with saw blades and a spike, which allows him to bounce in the air for a while, but it also can do the same for Mario if he jumps on Rango's hat. He is fought in the Lake Kingdom and the Snow Kingdom.

Spewart is the entertainer of the group, who spews poison from his mouth and hat to damage Mario. His name is a pun on "spew" and the name "Stewart". He is fought in the Wooded Kingdom and the Luncheon Kingdom. 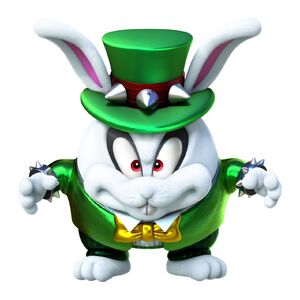 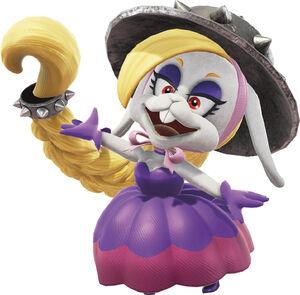 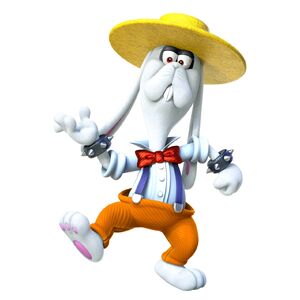 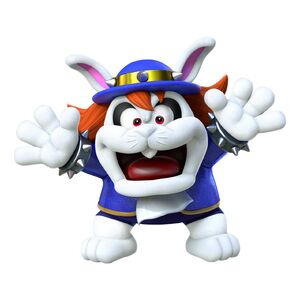 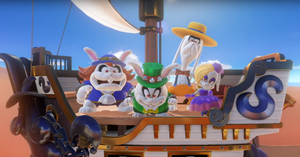 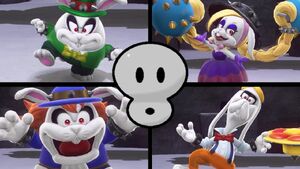 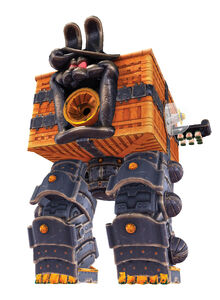 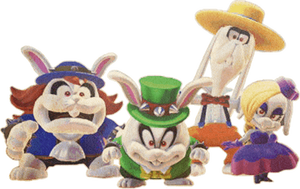 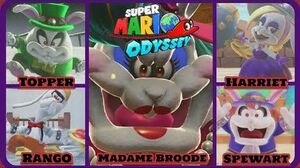