Brooke Tessmacher is a former WWE Diva currently competing as a TNA Knockout. In her career, Brooke has held the Knockouts Championship on two separate occasions and also held the Knockouts Tag Team Championship once. Brooke never really portrayed a villainess during her brief stint in WWE, but she did act as a villainous Knockout on one occasion.

After portraying a babyface for her entire career, Brooke re-emerged as a villainess on August 22, 2013 when she became the girlfriend of Aces & Eights leader Bully Ray. In her role, Brooke mostly served as a valet for not only Bully, but other Aces & Eights members as well. As far as in ring competition, Brooke defeated Velvet Sky to earn an opportunity at the Knockouts Championship at Bound For Glory against titleholder ODB and Gail Kim, who won the title at the event. Aces & Eights disbanded in November 2013, but Brooke did continue to compete as a villainess in a losing effort to Velvet Sky on an edition of Xplosion. Brooke was off TV for several months before returning to Impact on June 12, 2014 in a segment with Ethan Carter III and Rockstar Spud. In the segment, EC3 and Spud attempted to get Brooke to air out Bully Ray's dirty laundry, but she wouldn't do so. As a result, Brooke's villainous role came to an end.

Brooke appeared at the second Knockouts Knockdown PPV on May 10, 2014 (aired on November 7, 2014) and portrayed the villainess in her match against her protege, Deonna Purrazzo. Before and during their match, the evil Brooke bullied and insulted Deonna en route to defeating her. Since then, Brooke has worked as a babyface.

In her brief stint as an evil Knockout, Brooke was very seductive, coquettish, and provocative, and competed with a steady amount of viciousness and arrogance in the ring. 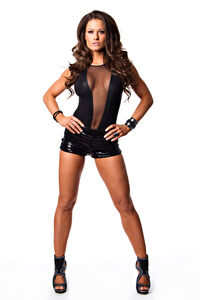 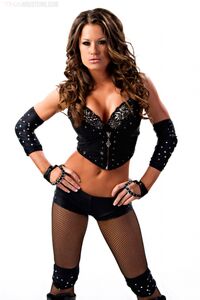 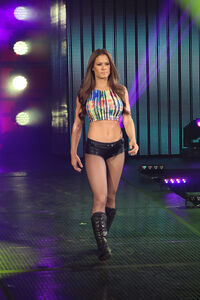 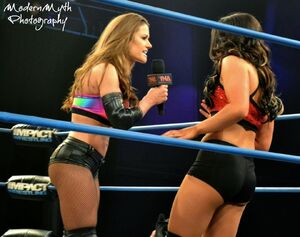 Add a photo to this gallery
Retrieved from "https://villains.fandom.com/wiki/Brooke_Tessmacher?oldid=2825010"
Community content is available under CC-BY-SA unless otherwise noted.