High Priest of the Church of Blood

Super Strength (after drinking blood)
Summoning abilities
Charisma
With Eternity’s Powers:
Bridge creation to and from the afterlife
Necromancy

Kidnap Raven and force her to wed him (successful).

Cleanse the Earth of all non-believers.
Take over the world
Take revenge on the Teen Titans (all failed).

Brother Blood, real name Sebastian Blood IX, is a major antagonist from the DC Comics franchise. He is the secondary antagonist of the Teen Titans comics.

Sebastian was the ninth individual to assume the name of Brother Blood, thus he was renamed Brother Blood IX. As demanded by eight generations of tradition, whoever holds such a title is recognized as the High Priest of the Church of Blood and an emissary to the demonic entity known as Trigon.

Due to a 700-year-old curse, an individual can only achieve the title of Brother Blood through an act of patricide. There is no formal observation of ascendance, and the child of the High Priest can murder his father and assume his rank at a time of his own choosing.

While still a teenager, Sebastian stabbed his father to death, after the latter's failed attempt to take over the Slab and abduct a million infants. He dumped Blood's body into the river and assumed the mantle of Brother Blood. By rite of ascendance, Sebastian took control of the Church of Blood commanding loyalty from legions of loyal followers.

Garbing himself in the vestments of his father, the new Brother Blood embarked upon a bold plan to solidify the mystical power of the Church of Blood.

He instructed his cultists to seek out and abduct Raven, the half-human daughter of their Lord, Trigon. The Church of Blood hunted Raven down and brought the weakened girl to one of their underground domains.

Blood declared that Raven was to be his new sister-bride and consummated the pact by literally biting the Chakra gemstone off Raven's forehead and swallowing it. Through Raven, Blood intended to sire a child stronger than any that has ever arisen throughout the Church’s history.

Together, they were to cleanse the Earth of all non-believers and achieve total global control of the planet.

The dark and powerful side of Raven's soul, reacted adversely to her imprisonment. Her soul-self splintered and expanded outward across the San Francisco Bay area.

For miles around, people began to fall into a hypnotic daze, endlessly chanting, "Raven belongs to Brother Blood". Raven's former allies the Teen Titans sought her out and located her at Blood's sanctuary.

Unlike his predecessors, Sebastian took an active role in the Church's ambitions. Not content to merely order his cultists to fight the Titans, Blood himself engaged in battle and began savagely attacking them.

He latched onto Superboy and sank his teeth into the hero's arm, drinking some of his blood. Like a living vampire, Sebastian's strength increased with the infusion of blood and he became even more powerful.

He managed to briefly overcome the Titans, but Robin (aided by Deathstroke and Ravager), managed to distract Brother Blood by driving a Batarang into his helmet. Blood grabbed Raven and escaped through the tunnels until he reached the surface.

Sebastian quickly conducted a ritual to finalize his marriage to Raven in accordance to centuries' worth of prophecy. With Raven firmly under his control, Blood used her soul-self to open a doorway to the eighth plane of Hell, releasing a horde of flying demons. The demons began slaughtering anyone (even cultists) who was not a true believer in the path of Blood.

The Titan known as Beast Boy transformed into an roundworm and entered Brother Blood's mouth. Directing himself towards his stomach, he recovered Raven's Chakra stone and forced Blood to regurgitate both the stone and himself. With Raven now under full control of her powers, she enveloped Brother Blood in her soul-self, transporting him to the eighth plane of Hell.

Even in Hell, Brother Blood struggled to find a way to return to Earth and reclaim his title. As luck would have it, the unfettered spirit of vengeance known as the Spectre widened the breach between the lands of the living and the lands of the dead.

Brother Blood discovered the late mystic adventurer known as Kid Eternity and chained him to the gates of the afterlife. Taking control of Eternity’s powers, he entered the gates and reappeared on Earth.

He instructed them to go forth and slay the Teen Titans. While the demons razed the City of Angels, Brother Blood traveled to Titans Tower where he encountered Raven. He brutally attacked her, biting into her shoulder. Beast Boy intervened and saved Raven’s life. Blood temporarily escaped.

They returned to Earth and squared off with Blood in the streets of Los Angeles. Kid Eternity used his ability to summon the dead to resurrect the bodies of all eight previous generations of Brother Blood. The Blood family descended upon Sebastian and destroyed him. With Sebastian dead, all of his effects ceased and his demon agents returned to Hell.

Brother Blood makes an appearance as a boss in DC Universe Online.

Sebastian Blood, secretly known as Brother Blood, appeared in Season 2 of Arrow as the secondary antagonist turned semi-anti-hero. He was a resident from the Glades, who has had enough of the poverty in the area and is running for mayor. He blames the Queen family for the destruction of the east part of the Glades.

It is later revealed that he was in league with Slade Wilson. He and the Cult of Blood kidnap people and inject them with the experimental drug that gave Slade his super strength, including Roy Harper and Blood's right hand man, Solomon Grundy.

He was portrayed by Kevin Alejandro.

Brother Blood is set to appear in the fourth season of Titans. He will be portrayed by Joseph Morgan. 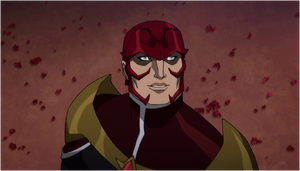 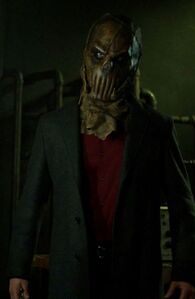 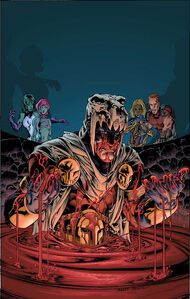 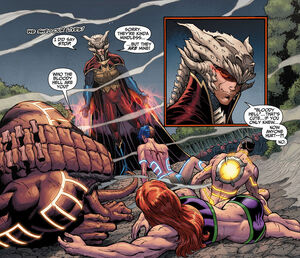 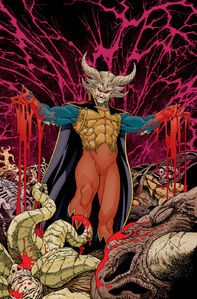 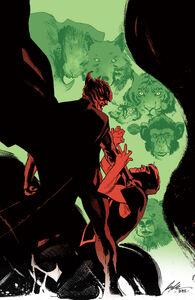 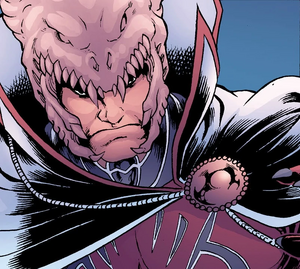