Headmaster of the H.I.V.E. Academy

Watch over and moderate the activities of the students at H.I.V.E academy (formerly)

Brother Blood is the main antagonist in the third season of Teen Titans, and the archenemy of Cyborg. In this version, he is the headmaster of the HIVE academy school. He has the power and ability to influence people's minds.

He is voiced by John DiMaggio, who also played Dr. Drakken in Kim Possible, Diagon in Ben 10: Alien Force, the Joker in Batman: Under the Hood, Don Vito in MTV's Celebrity Deathmatch, and Bender in Futurama.

He first appeared in the episode "Deception" while Cyborg (disguised as Stone) were practicing combat with Gizmo, Jinx, and Mammoth. After Cyborg betrayed Blood and destroyed his school academy, Blood has many plans to get revenge on Cyborg for destroying his school.

Later, in the episode "Wavelength", he hired Bumblebee, a student from the H.I.V.E. academy, to fight Cyborg. After Cyborg and Bumblebee made up, they worked together to fight Blood and destroy his underground fortress near the ocean.

In the episodes, "Titans East Part 1 and 2", he sent a monster called Steamroller to fight Cyborg and the Titans East. After that, Blood once again fought Cyborg and badly injured him, but he used a secret weapon to shoot Blood out of the tower.

Then, Blood became an android and was more powerful than ever. He controlled the Titans East to attack Cyborg, but Robin and his friends came to his rescue. Then, on top of the tower, Cyborg and Blood came face-to-face in one final showdown. He easily injured Cyborg, but there was only one thing Blood can't destroy in Cyborg's body; his core, which restored his body. Then, Cyborg finished Blood off by destroying his hands and giving him a kick, thus defeating Blood. Aqualad stated that he was sent to prison and vowed that Titans East would make sure he would stay there.

Brother Blood is a recurring villain on Teen Titans Go!. He first appeared in the episode "Waffles", where he had Robin, Raven, and Starfire in an inescapable cage after telling them he thought of every other possibility for them to easily break out of there. He planned to force them to grant him access to Titans Tower so he could obtain its secrets. However, he needed Cyborg and Beast Boy too, but when they showed up, they kept playing their game by saying nothing but "Waffles" a lot. He used Pain Bot to interrogate them, but Blood was still annoyed with them. Eventually, after all the other Titans started to sing with them, until Brother Blood lost his sanity and ran out of his hideout.

Brother Blood as a cyborg. 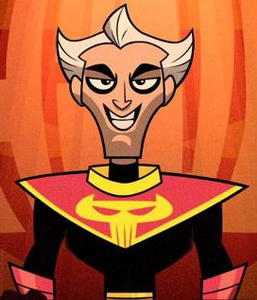 Retrieved from "https://villains.fandom.com/wiki/Brother_Blood_(Teen_Titans)?oldid=3291542"
Community content is available under CC-BY-SA unless otherwise noted.