Brother David is the main antagonist in the 5th season episode "Into the Fire" of the 1995-2003 CBS supernatural drama TV series Touched by an Angel. He is an enigmatic cult leader who leads Idaho's cult organization comprised of men, women, children known as the "Golden Path" (also acronymized as "GP") who wore all dark-blue colored clothes (long sleeved shirts and dark blue jeans) as him and followed his "teachings" including his sort of Y2K-warped doomsday prophecy called the "Four Nines" (9th day of the 9th month of the 99th year as in "9999"), an unproven world-wide extinction level event dealing with mass computer data-dumping would come upon the planet Earth on September 9th on the year before the beginning of the 21st century A.D.

He tempted a troubled woman named Melina Richardson into joining the Golden Path Institute, name of the Golden Path's headquarters as well as the said cult's secondary alias. This situation prompts the angels (specifically Monica and Andrew) to intervene as well as prevent Melina's fate of becoming a victim to the cult.

A postman drives by the Golden Path campground for a certified letter to have its signature from whoever receives it. David accepts this fact and secretly writes "John Doe" as his signature. He offers to present the route to the postman afterwards. Andrew temporarily disguises himself as an employee for the Department of Children's Service, but David totally rejects him about communicating with the cult's residential children. Andrew sternly warns him about the advice for either to be in cooperation with himself or eventually respond to the authorities, but David rationally replies that he only responds to God.

All members of the Golden Path Institute begin listening Monica when she reveals herself as an angel, but Brother David rebukes her divine honesty about God. David's former cult group successfully evacuates with the help of Monica miraculously unchaining the barricaded doors after David intentionally sets the chapel on fire.  Monica makes an attempt to persuade Brother David to exit the blazing cult sanctuary, but he continues to believe in his own claims of holiness instead of finally admitting about his transgressions against God. Andrew consigns David's soul to Hell as the result.

Monica and Andrew along with first responders meet the former cult followers on the next morning. Paramedics pass by with a gurney holding David's shrouded corpse placing it into an ambulance. The angels encourage the outcast to join Christianity and entirely abandon their self-destruct ways by accurately identifying themselves (Brother Jacob's actual name is William Kitchell while Rebecca reveals herself and their daughter to be Samantha and Carolyn).

The Golden Path Institute ceased its existence because of David's death. 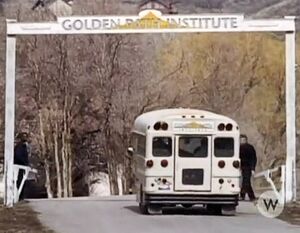 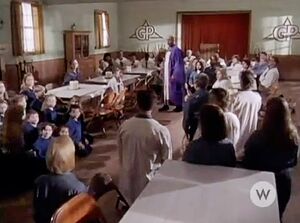 The Golden Path
Add a photo to this gallery

Retrieved from "https://villains.fandom.com/wiki/Brother_David?oldid=4074653"
Community content is available under CC-BY-SA unless otherwise noted.