Villains Wiki
Register
Don't have an account?
Sign In
Advertisement
in: Mature, Outdated Articles, Kimetsu No Yaiba Villains,
and 26 more

The Brother Spider is a member of the Spider Family and a minor antagonist in Demon Slayer: Kimetsu no Yaiba. He is supposed to fill the roll of the brother in Rui's Spider Family, but his sadistic tendencies often lead him to mock his so-called "family members".

He was voiced by Shōtaro Morikubo in Japanese and Derek Stephen Prince in English.

The Brother Spider looks remarkably different from his so-called family members. The entity has the appearance of a massive, black spider with orange stripes running down its legs, but with a human head instead of a spider's head. This head has pale skin and white hair, two mismatched eyes (one being a human's blue eye, the other red with a blue iris), greyish-white skin, and red markings across his face.

The Brother Spider appears to be bloodthirsty and sadistic as shown by his reaction when the Mother Spider committed an error and was about to face the music (a flashback that she witnessed after her decapitation), but is also a coward.

The Brother Spider makes his debut during the Nagatumo Mountain arc when Zenitsu Agatsuma searches for his friends. One of the spider's minions bites Zenitsu's hands, and the Brother Spider shows himself from a hanging building. The Brother Spider taunts him over getting turned into a spider by his minions and shows Zenitsu a clock to explain how much time Zenitsu is left before his humanity fades. However, Zenitsu uses his Thunder Breathing to get the upper hand in the fight. The Brother Spider's last moments were of utter disbelief that Zenitsu had defeated him, the Demon's body striking the ground in two parts: his headless body and his head. 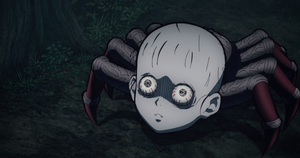