The Brotherhood of Darkness were a group of light sensitive mutants who appeared in 2000 AD comic strip Judge Dredd. They had an hatred of Mega-City One and they were the first mutants to appear in Judge Dredd.

Raid in Mega-City One

The Brotherhood of Darkness committed mass raid in Mega-City One, abducting numerous hostages, including the mayor's son and they were sent into their camp at the Cursed Earth. Judge Dredd was then sent to rescue the mayor's son and disguised as one of the mutants and waits in their camp until it's nightfall. He then proceeds to kill some mutants and rescues the hostages until he was surrounded, but due to their sensitivity to light, Dredd proceeds to flick on the lights, blinding them. He then manages to escape with the prisoners while the Brotherhood retreated back to the Cursed Earth.

While Dredd's Land-Raider rushes to deliver a vaccine to Mega-City Two, they go past the Mount Rushmore National Memorial which is an monument to the presidents of the United States but a face carved at the end is a mutant which Dredd notices and he advises his convoy to be on Double Alert for mutant attacks. A mutant named Brother Gomorrah was watching the convoy go past and he heads back to their ruined city and informs the leader of the Brotherhood, Brother Morgar about the convoy and he orders them to kill all of the 'norms' (Non-Mutated humans). The mutants use a "La-Saw" Mobiles (which are machines in the 21st Century that are used to carve stones) and the convoy try to shoot it down but it's laser-blades were immune to the convy's weapons and it charged down, cutting the road in half but fortunately Dredd managed to stop his killdozer in time but the vaccine was trapped on the other side and was captured by the Brotherhood. Dredd and Spikes do succeed in destroying the La-Saw by shooting the pilot and it crashes into one of the president's faces carved in, knocking the statue's teeth out. Dredd then uses the Killdozer (which is capable of climbing any terrain) to climb the Heights of Abraham. The mutants have managed to capture the vechile with the vaccine and the Judges and they were about to destroy the cargo and execute their prisoners but Dredd appears and threatens to destroy the mutants face carved into the mountain unless they release the cargo and the prisoners, Morgar begs Dredd not to do it and releases them. Spikes tells Dredd they he'll be humilated in front of the Brotherhood and will be looking for revenge but Dredd states that the mutants deserve pity.

While Dredd's Land-Raider was trying to escape from the Brotherhood, the vechiles start breaking down and the weapons on the vehicles stop working. Spikes Harvery to catches an mutant hiding behind a tree and the mutant begs that he meant no harm when he stopped their vechiles and his name is Novar. Spikes attempted to attack him but Dredd pulls him back, stopping him from attacking Novar. One of the Judges then spots an army of the Brotherhood mutants charging towards them and Dredd orders everyone into combat positions and he'll deal with Novar later. The mutants then charge towards the Land-Raider and battle starts with numerous Brotherhood mutants killed and Judge Gradgrind getting killed. Novar attempted to stop the fighting but he was almost killed by one of the mutants until Dredd saves him and knocks the mutant with his gun. Then Brother Morgar attempts to throw his knife towards Dredd but it turns out Novar has telekinetic powers and makes the knife stab Morgar, killing him. He then uses the metal objects on the tree he created to kill numerous mutants until the Brotherhood retreat. Dredd then offers Novar to come with him but he refuses, stating that the Cursed Earth is his home. 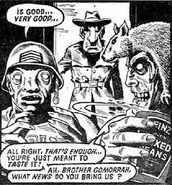 Retrieved from "https://villains.fandom.com/wiki/Brotherhood_of_Darkness_(Judge_Dredd)?oldid=2360939"
Community content is available under CC-BY-SA unless otherwise noted.