The Brotherhood of Evil

Within an exclusive girls' school in Paris

Each members possesses their own super powers

Achieve world domination (in the beginning).

Destroy Niles Caulder and his colleagues (true goal; both failed).

Hegemonic Supervillains
The Brotherhood of Evil is an evil organization that seeks world domination and a massive group of all of the DC Comics supervillains in the Teen Titans cartoon series and the Teen Titans comic book series. They are led by The Brain and his associates Monsieur Mallah, General Immortus and Madame Rouge, and who also have been old enemies of the Doom Patrol.

Following his death, a man's assistant was able to preserve his brain in a liquid filled container. The Brain became the head of the Brotherhood of Evil, whose secret headquarters was in an exclusive girls' school in Paris. Under his leadership, the Brotherhood became the most powerful crime syndicate in the world.

The Brotherhood and the Doom Patrol have clashed on numerous occasions in the past; the only instances recorded in the series involved a Black Hole Generator which could be opened and closed in any location of the Brotherhood's choice.

Because of their frequent conflicts, the Brain and General Immortus were gradually able to analyze and predict the Doom Patrol's modus operandi, which was further benefited by Mento's stubbornness and inherent drive to see a mission finished no matter what.

Finally, they managed to trap the Doom Patrol (sans Robot Man, who was left deactivated) during a mission in the Brazilian jungle, where the Brain's forces were scavenging materials to charge a power cell for their newest version of the Black Hole generator.

Mento managed to send an alarm probe to his former protegee, Beast Boy, who arrived with his new teammates, the Teen Titans, and managed to free the Doom Patrol, though the Brotherhood leaders escaped to their secret base, which also housed the Generator.

Mento was insistent that only the Doom Patrol could fight the Brotherhood efficiently, so he drafted Beast Boy back into his ranks and set out to destroy the base, but owing to various hazards set by the Brotherhood, only Mento and Beast Boy managed to arrive there.

However, in the meantime Beast Boy had managed to persuade Mento that his usual ramrod approach was no good, and both overcame the base's defenses by using their heads instead.

In addition, the other Titans, who were reluctant to leave Beast Boy by himself, also arrived, having rescued the rest of the Doom Patrol on the way, and joined the two in their assault, during which Beast Boy cunningly set the Generator to destroy itself.

However, the Brotherhood now saw the Titans and their compatriots as their primary enemies due to their youthful unpredictability. Thus the Brain hatched a plan to defeat Earth's youngest generation of superheroes before they could get properly organized: they conducted odd attacks on Honorary Titans, both to alarm the Titans and to obtain a Titans Communicator in order to track them once a proper network had been established.

Madame Rouge managed to obtain a com device from Hot Spot, and after all Titans and Honoraries had been connected, the Brain executed its plans, taking out the young heroes one by one while they weren't assembled into one team.

But what the Brain failed to consider was that several Titans, chiefly Beast Boy, managed to escape captivity; they succeeded in penetrating the Brotherhood's base and initiating a massive battle with the assembled villains.

When Más y Menos managed to unfreeze the Titans who had already been captured, the Brain's plan backfired spectacularly, and in the end the Brotherhood leaders and most, if not all, of their allies were captured and flash-frozen themselves.

Allies of the Brotherhood of Evil

The Brotherhood of Evil's list of allies includes most of the villains who have previously appeared in the animated series plus several new characters who had to date no previous appearances.

In addition, several villains are re-featured who were subject to defeats which had left them permanently incapacitated, but who nevertheless made at least a cameo appearance in Homecoming - Part 2.

The only villains not featured here are Slade, Trigon, Brother Blood, Krall, the White Monster, Soto (the alien from "Every Dog Has His Day"), Shrieker, Blackfire and the Cironielian Chrysalis Eater, all for unknown reasons.

The list of the core members of the Brotherhood of Evil:

Second Brotherhood of Evil/Society of Sin 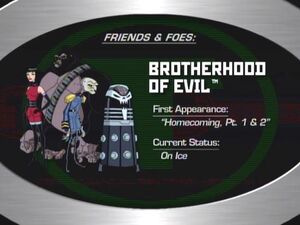