Children of the Sphinx (sub-group)

Prepare Earth for the return of "Great Old Ones".

Silence any who attempts to expose them.

The Brotherhood of the Black Pharaoh is another ancient fanatic cult that serves Nyarlathotep in his aspect as the Black Pharaoh, and they are one of the many antagonistic groups featured in the Cthulhu Mythos by the late legendary horror author H.P. Lovecraft. Its leadership is primarily of Egyptian descent, though in modern times it has become more inclusive of other nationalities.

The Brotherhood themselves has connections to the Church of Starry Wisdom, the Cult of the Bloody Tongue, and the Brotherhood of the Beast. It includes a subgroup known as the Children of the Sphinx that specializes in embalming mummies with the heads of animals.

Far more subtle than the Cult of the Bloody Tongue, these masters of dark sorcery attack by calling down ancient Plagues of Egypt upon their foes. These ten forbidden spells can blot out the sun, rain fire, turn rivers to blood or even summon the Angel of Death itself. The Brotherhood, acting through the once noble Penhew foundation, also has an interest in ancient relics they can use to increase their power. As a result their agents are often found in the darkest corners of the earth.

Just as the Bloody Tongue has M'weru, the Brotherhood has Aubrey Penhew, a corrupt Egyptologist. While the Mystery is structured similarly to M'weru's (and the matching mysteries for the leaders of Children of the Bat and the Order of the Bloated Woman), each leader is a very different combatant. Penhew is a dark sorcerer, capable of cursing any who challenge him. Evading this curse will require you to find ancient Pharaonic magic, and even then only a magically gifted investigator will dare to face him.

Another of the Brotherhood's four Mysteries involves unravelling the secrets of the Carlyle expedition. The investigators will have to follow the trail from city to city, tracking down leads on each of the principals. When their researches are complete they will have to follow in the doomed expedition's footsteps, to the secret chamber of Nyarlathotep inside the Bent Pyramid. Here the expedition was corrupted, and here the investigators will finally learn the truth. 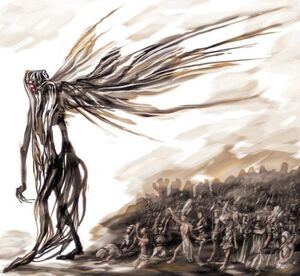