Brotherhood of the Skin

Brotherhood of the Skin

Brothers of the Skin

Call of Cthulhu: Horror on the Orient Express

During the 19th Century

Obtain Sedefkar Simulacrum and piece it together.

Kill any who hinders their quest to Sedefkar Simulacrum.

The Brotherhood of the Skin (also known as the Brothers of the Skin) are a fanatical secret society of malicious killers that first appeared in the Horror on the Orient Express campaign. They are one of the many antagonistic groups in the Cthulhu Mythos genre by the late famed author H. P. Lovecraft.

The Brothers of the Skin are a secretive and greatly feared cult that is based in Istanbul. Some of the Brothers are situated in Old Stanboul. The Brothers perform their ceremonies to summon the Skinless One.

Some of the Brothers create a Skin Beast to destroy the cult's enemies or act as a guardian. The creation of such a being is considered a particularly holy event for the Brothers and only the most pious acolytes may take part in the ritual. 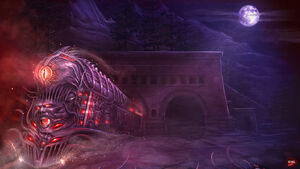