Destroy anyone who gets in their way.

Brothers Grimm are a pair of antagonists from Marvel Comics comics. They have faced Iron Man among other heroes.

Doll collector Nathan Dolly acquired two ywelve-inch wooden figures from a doll maker on Wundagore Mountain, a mountain in the Balkans of Central Europe where the Earthly essence of the demon Chthon was imprisoned.

The doll maker showed Dolly how he could animate the figures by projecting his life essence (astral form) into it. Nathan Dolly made the fatal error of trying to animate both dolls at once, and left his human body lifeless. His consciousness became trapped in the twin figures, Dolly managed to mail himself to his wife Priscilla in America. There, Dolly researched the occult until he discovered a way to transfer his life essence from the dolls to full-sized mannequins.

Eventually Dolly desired to posses a real human body rather than exceedingly lifelike mannequins. With his wife's help, Nathan Dolly coerced the sorcerer Magnus in a magical rite of transference for him. Magnus prevented Dolly's spirit from taking possession of the human body he sought to inhabit, and Magnus blocked his spirit's return to the mannequins. Nathan Dolly's life essence had nowhere to go and presumably passed from the Earthly plane.

wo brothers acquired the run-down theater where discovering the full-sized mannequins of the Brothers Grimm. Percy and Barton Grimes felt compelled to try the Brother Grimm costumes on. Doing so, they discovered they possessed the same powers of prestidigitation that the original Brothers Grimm mannequins had. They used these powers to take revenge on a business rival, and were opposed by Iron Man II. Percy and Barton Grimes were taken into police custody for their crimes and are currently out on ball. It is not yet known how they gained the powers of the Brothers Grimm: whether Nathan Dolly's abilities were conferred upon the costumes at his demise, or whether Dolly's life essence in some way possesses the costumes.

The Brothers Grimm possess the magical ability to conjure seemingly from somewhere in their costumes a variety of novelty items with special offensive capabilities. The objects appear as if by sleight of hand, and seem to be limited to a size that can be held with one hand. Apparently, the Brothers can conjure whatever novelty item they can imagine. The limit to the number of items they can conjure in rapid succession is not yet known. Among the items they have produced are long strands of nearly unbreakable golden thread, corrosive-filled eggs, pies filled with blackbird, paralytic "stardust," and amazingly fast growing bean seeds. 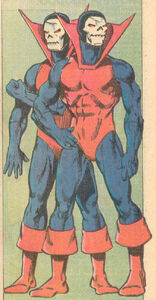