Walter Bruce Willis, also called "The Hitman", is a fictionalized version of the actor of the same name appearing as the main antagonist in the Gorillaz music video for "Stylo".

He was portrayed by himself, Bruce Willis also portrayed Muddy Grimes in Beavis and Butt-Head Do America, The Jackal in the 1997 film of the same name, Lt. Muldoon in Planet Terror and Old Joe in Looper.

He appears in the video for Stylo when he is seen chasing Murdoc, 2D and Cyborg Noodle while they are driving in the middle of a desert in Murdoc's 69' Chevy Camaro known as Stylo.

He is seen attempting to kill the three for unknown reasons although it is speculated that he is a bounty hunter for the Boogieman, an evil force which is chasing Murdoc in an attempt to claim his soul. He fires through the window just barely missing Murdoc and 2D and falls behind firing various shots at the car and laughing maniacally while doing so (although his laughter is muted by the music).

He eventually leads the band into driving the Stylo off of a cliff and into the water. He walks over and looks below at the water admiring his work and leaving not knowing that the car morphed into a shark shaped submarine. 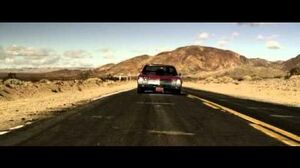