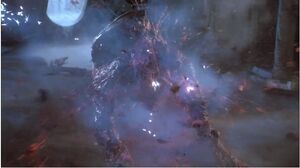 Brundlefly's death by Veronica after he begged for her to kill him.
Community content is available under CC-BY-SA unless otherwise noted.