Prevent the player from escaping.

The Brute is one of 3 villains and monsters (the other being The Hunter and The Fiend that the protagonist face in the video game Monstrum.

True to his appearance and behavior, Brute is a brutish monster that looked like a large, heavy-built, bipedal humanoid creature. At the first glance, the creature resembles a humanoid rock/lava with an extremely hot, glowing core that causes orange light to project from its eyes and mouth. Closer inspection of the Brute however, suggests that its body may be comprised of thick charred flesh, and that its hands and feet are curiously human like. The Brute does not appear to have eyes, though this does not affect its ability to see, suggesting it may possess some form of infrared vision or bat-like echolocation.

True to its name, the Brute is a brutal and aggressive monster that dependant on raw strength to maul the protagonist to death. The monster also least intelligent compared to other monsters in the ship because of it's suspectibility to distractions and noises. Even so, the Brute is still intelligent in it own right, as it can and will use shortcuts in a chase better than other monsters.

As its name suggests, the Brute's skillset revolves around raw strength and aggression.

There are three things you need to pay attention when dealing this monster, which can be easily exploited due to its nature more than often give away its position: 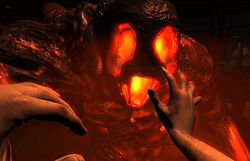 Add a photo to this gallery
Retrieved from "https://villains.fandom.com/wiki/Brute_(Monstrum)?oldid=3225673"
Community content is available under CC-BY-SA unless otherwise noted.