Second-in-command of the herd

Reach the Nesting Grounds (failed).
Save Aladar and the herd (succeeded).

He was voiced by Peter Siragusa.

Being second-in-command, Bruton is shown to be very rude, cranky, impatient, mendacious and disrespectful to any newcomers, so he usually follows Kron's orders. Bruton shows no mercy at first and refuses to listen to any of Aladar's suggestions. However, Bruton later reforms when he wards off the two dangerous Carnotaurs that had followed Aladar, the four lemurs, Baylene, Url, and Eema into a cave. Bruton sacrifices his own life to save them, which proves that he truly has a heart after all.

As Aladar and his lemur family are running to escape a hungry pack of carnivorous Velociraptors, they run into the herd of dinosaurs, and their stubborn leader named Kron pushes Aladar out of the way by telling him to stay out of his way to which Bruton yells at Aladar, "You heard Kron! Move it!". When the herd stops to find a resting spot for the night, Bruton tells Kron that there is a more protected spot further down, but Kron tells Bruton that the herd will sleep where they are for the night and tells Bruton to tell the herd that they have found their resting spot for the night to which Bruton does. When Kron, Bruton, and Kron's sister named Neera pass Aladar, Aladar asks Kron if he can talk to him, to which Bruton snaps at Aladar and says "Get lost, kid!", but Kron tells Bruton to relax and listens to what Aladar has to say and when Aladar asks him to slow down for the slower dinosaurs that Kron tells him to let him do the thinking from now on.

The next day, Bruton tells all of the dinosaurs to get up because Kron has said that everyone goes. Aladar's lemur friend named Zini remarks about Bruton saying "The charm never stops around here.". Bruton then turns to Aladar and asks "You say something?", to which Aladar replies "No, sir.".

Bruton then tells Aladar that he and Zini (whom he calls a "little parasite") better get moving unless they have a death wish. Zini then calls Bruton ugly under his breath. Kron tells Bruton to give the herd the orders about getting to the water on the other side to which Bruton tells the herd to keep up because if a predator catches them they are on their own and then he orders the herd to move out. On the way, Kron tells Bruton that the herd is moving too slow and Bruton says that he will pick up the pace and orders the herd to move faster. When they reach the lake, the herd discover that the lake is a drybed with no water and Kron orders Bruton to take a scout and check the entire perimeter to see if there is any water. Bruton and the scout find no water on their search to which the scout replies that he thinks that they should get back, but Bruton tells him to keep it down. Bruton then spots a shadow of a Carnotaurus and tells the scout that they should leave, but a Carnotaurus appears from behind and grabs the scout by the tail, killing him. Then, another Carnotaurus appears and tries to kill Bruton, but he manages to escape with wounds. Bruton rushes back to Kron and tells him about the Carnotaurs and Kron coldly blames Bruton for leading the Carnotaurus to them saying that maybe Bruton could feed the Carnotaurus with his hide. He then orders Bruton to move the herd out to which Bruton does so.

On the way, Bruton is left behind to die because of his wounds but he is found by Aladar, Baylene, Url, Eema and the lemurs. Aladar offers to help Bruton, but Bruton tells him that he just just needs some rest and orders Aladar to get away from him. Aladar tells Bruton that if he changes his mind that they will be in those caves nearby. Bruton later decides to join the dinosaurs and lemurs inside the cave and Plio nurses Bruton's wounds from a plant that grew on Lemur Island. Bruton then asks why Aladar pushes the herd on with false hope, to which Plio replies that it is hope that has gotten them this far. Bruton then asks her why does he not let the herd accept their fate and that he accepted his fate which is to die in the cave. Plio tells Bruton that it is his choice instead of his fate to die if he chooses to give up and that the plant will help him.

That night, the two Carnotaurs appear at the cave, to which Bruton tells Aladar that they should wake the others and move deeper into the cave. However, as the dinosaurs and lemurs are moving, the two Carnotaurs spot Aladar and grab him, but Bruton (remembering about what happened to the scout) immediately pushes into battle and tells Aladar to help the others while he holds off the Carnotaurs. Bruton manages to fight off the Carnotaurs, but then the rocks from the cave begin to crumble on both him and the Carnotaurus. Aladar comes back and tries to help Bruton, but the rocks fall on Bruton before he can. After the rocks are done falling, Aladar digs through them and finds Bruton, who has died from being crushed by the rocks and Aladar mourns the death of his friend to which Plio replies that he did what he could. Even though one of the Carnotaurs managed to survive the cave-in, Bruton's sacrifice was not completely in vain, as the second Carnotaurus died along with him, and the leading Carnotaurus would eventually be defeated by falling to his death during the film's climax. 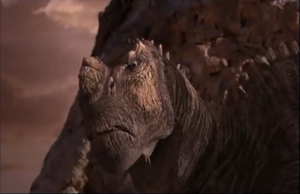 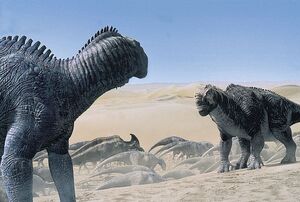 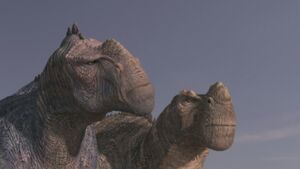 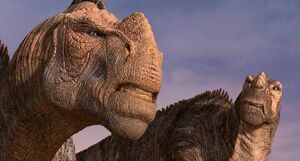 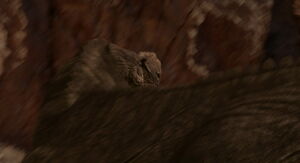 Bruton fearfully looking at the Carnotaurus. 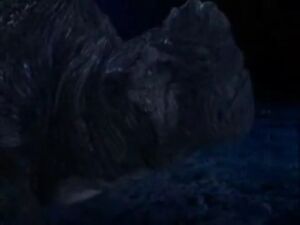 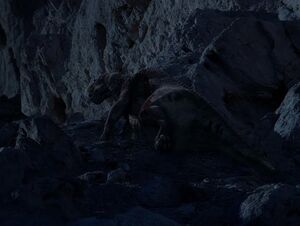 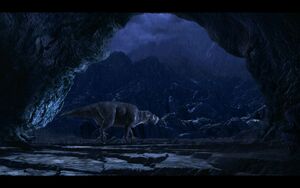 Bruton getting close to the cave. 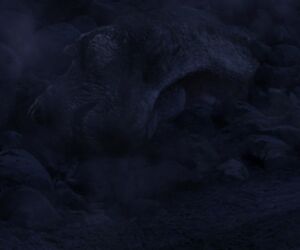