Undead Criminal
Brutus the Ruthless is a major antagonist and the sixth boss in The House of the Dead: Overkill.

He was originally one out of two convicts who were both charged for countless crimes (including one instance of eating a little boy's puppy) before being killed on the electric chair six months ago and then "tinkered on" by Clement.

Clement originally sent them both to attack G and Washington, however his partner moved in to attack. Brutus responded by elbowing his partner in the face, breaking his neck, and beat him into a bloody pulp. He then lets out a massive roar, as well as a dagger, as he turns his attention to the two agents.

Instead of a Tarot Card, Brutus is based on the Shakespearean character Brutus of Julius Caesar, who is the first to stab Caesar (like how this monster strikes down his partner).

The two shared the same mutant appearance; big and fat, covered in tattoos, wearing a black skin-tight mask on their heads (very similar to that of the second game's boss Strength), and with a multi-dagger crossbow-like launcher on their handless right arms. 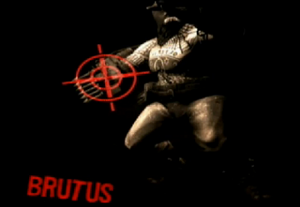 Brutus' weak point.
Add a photo to this gallery 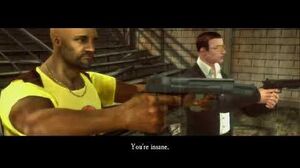 Retrieved from "https://villains.fandom.com/wiki/Brutus?oldid=3433200"
Community content is available under CC-BY-SA unless otherwise noted.