Get revenge on their own ex-master for her abuse towards them (succeeded).

Brutus and Nero are Madame Medusa's two pet crocodiles and the secondary antagonists of Disney's 23rd full-length animated feature film The Rescuers, which is based on the 1959 British children's novel of the same name by the late Margery Sharp.

Their vocal sound effects were provided by the late Candy Candido.

Brutus and Nero first appear watching Penny, an orphaned little girl, and making sure that she does not escape, all while knowing she is not intimidated by them. They later have to find Penny because of Medusa's incompetent assistant, Mr. Snoops.

When the alligators find Penny, Brutus grabs Penny by the straps of her dress while Nero takes her Teddy Bear. Penny bravely chides the crocodiles for ruining her escape and threatens Nero for if he gets her Teddy Bear wet. When they return to the river boat, Brutus carries Penny upside down by her underwear. Mr. Snoops taunts Penny for her failed escape. Then Penny orders Brutus to put her down. Brutus smugly drops her to the floor where she lands on her head. Penny calls him a "freaky little dragon" for that.

Brutus and Nero, after Penny is forced to get the diamond for Medusa, take Penny back to Medusa's home. Again, Brutus holds her upside down by her underwear, prompting her to demand he put her down. This time, he ignores her, swings away from the cave and continues carrying her while Medusa and an arguing Snoops follow.

The animals help Penny by attacking Medusa and outsmarting her on every move. Brutus and Nero are tricked into going after Bernard and Bianca, and they become trapped in the elevator by the mice. Brutus and Nero are freed after the house falls apart. Medusa then hits them both with a rope in the final chase, presumably to make them go faster. However, they all land onto a pole that used to be part of Medusa's home. Realizing that their mistress has no real respect for them, Brutus and Nero turn against Medusa and decide to devour her in revenge of her abuse towards them in the end. It is unknown if Medusa survived or escaped, but it is assumed that Brutus and Nero have killed her and went on to live normal lives as normal crocodiles.

Although they do not appear in the game, Brutus and Nero have a cameo in the Graphic Novel as random crocodiles in Bog Easy, which make sense given that Madame Medusa's boat already appeared in the same place in Epic Mickey. 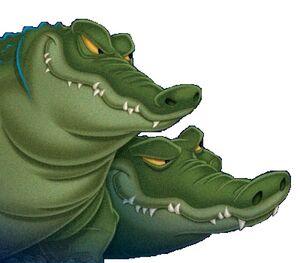 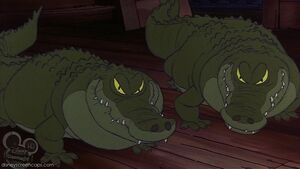 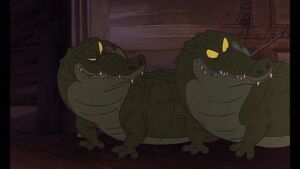 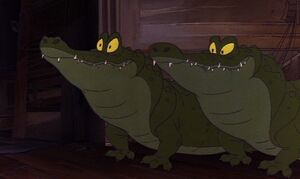 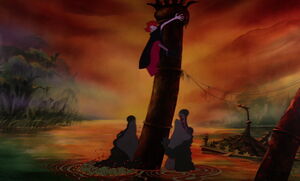 Brutus and Nero trapping their own master in revenge of her abuse to them. 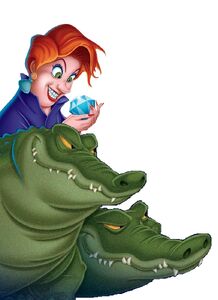 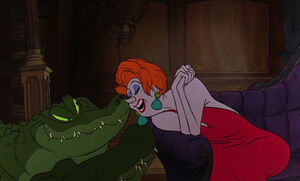