Member of the Roman Senate

Political powers from his status in the senate

Assassinate his own adoptive father to claim the Imperial throne.

Get rid of his adoptive father's biological infant child (presumably in order to be next in line of the throne).
Win the Olympic Games.
Marry Princess Irina.
Be the next ruler of Rome (all failed).

Brutus is a character and an antagonist in Asterix. Brutus is the adopted son of Julius Caesar and while not appearing as the antagonist as often Brutus has done (or tried to do) quite despicable things in stories such in Asterix and Son, The movie and video game adaptations of Astrix at the Olympic Games from trying to assassinate his own adoptive father, trying to get rid of his adoptive infant brother Caesarion to meddling with dimensions and realities (As seen in the game). Brutus is shown playing with knives at the senate table and sometimes hurts himself.

He was portrayed by Didier Cauchy, in Asterix & Obelix Vs Caesar, Victor Loukianenko in Mission Cleopatra, and Benoît Poelvoorde in Asterix at the Olympic Games.

In Asterix and Son, Asterix and Obelix are on the search for the parents of the baby they found near their doorstep. In Condatum Crismus Cactus tells Brutus about the baby and it is revealed that Brutus is determined to find the baby before Julius Caesar does. After a couple of failed attempts of kidnapping the baby, Brutus vows to put every single Gaul to fire and at the sword if the baby is not recovered. That night, Brutus launches an attack, commanding his legionnaires to fire flaming arrows at the village setting it on fire. While the male Gauls are busily counter-attacking against the legionnaires, Brutus confronts Impedimenta and takes the baby from her, and makes an escape in a rowboat heading to the Pirates ship where Captain Redbeard is waiting. However, Brutus is beaten by Asterix and Obelix and the Pirates flee. It turns out later that the baby is Caesarion, the biological son of Julius Caesar and Cleopatra. Brutus is punished by being exiled to Germania while Caesar rewards Asterix and Obelix by rebuilding their village that Brutus had destroyed.

Asterix at the Olympic Games (Film)

In the live-action film Asterix at the Olympic Games, Princess Irina of Greece has declared that she will marry whoever wins the Olympic Games after an argument between Lovestorix (Also known as Lovesix) and Brutus. Asterix and Obelix decide to help Lovestorix to win the games.

In a sub-plot of the film, Brutus constantly attempts to assassinate his adoptive father Caesar such as trying to feed him with a poisoned olive or turning the bathwater to acid with a weird bath salt he got from his assistant he got from Doctormabus.

When it is revealed that the Gauls team has been using their magic potions Brutus demands the Gauls to be banned from the games. However, Brutus is not much any better as he bribes the judges and constantly cheats. When Asterix calls out Brutus to his father, Caesar declares that the finale of the Olympic Games will be a chariot race.

Brutus has Getafix kidnapped and tries to force the druid to make a potion for the roman horses. This is found out by Asterix and Obelix who frees Getafix but not before creating the potion that Brutus wanted (But with a secret that will have Brutus exposed as a cheater in the finale of the Olympics)

Brutus feeds the potion on the horses that gives them immense speed and he "wins" the race. However, the tongues of the Horses are turned blue by the potion and Brutus is found out and loses the Olympics while the Gaul wins.

In the video game adaptation of Asterix at the Olympic Games, the story stays mostly the same as the movie but with a couple of twists and changes. In this adaptation, Brutus gets hold of an artifact of Doctormabus, a "key" that allows him to open up alternate realities which he is able to recruit millions of roman legionnaires while not considering the consequences of meddling with dimensions. When Brutus loses the chariot race to Asterix or Lovestorix he decides to attack them with his dagger. Obelix notices this and lands a blow on Brutus, sending him flying while Getafix points out that they have to retrieve the dimensional key from Brutus. Asterix and Obelix confront Brutus up on a hill and demand him to give them the dimensional key. Brutus refuses to give them the key and summons millions of legionnaires he got from different dimensions to attack the two Gauls. Asterix and Obelix defeat the roman legionnaires and force Brutus to surrender the key and send him flying in the air. Obelix states that Brutus will probably land on Caesar's lap and get the spanking of his lifetime. 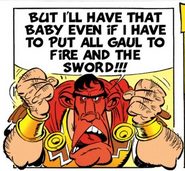 Brutus as he appears in the Asterix at the Olympic Games video game.

"Brutus! Stop playing about with that knife, you'll end up hurting somebody!" 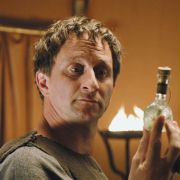