Right-hand and mount to Ommadon

Bryagh the Dragon, alternatively known as Bryaugh, is Ommadon's dragon, personal steed, and the secondary antagonist in Rankin/Bass Productions' 1982 animated fantasy film The Flight of Dragons, which is loosely based on the 1976 fantasy novel The Dragon and the George by the late Gordon R. Dickson.

He is a brutal red "devil dragon" who serves as the right-hand of the Red Wizard Ommadon, aiding him in his goal of driving humanity to its ultimate destruction. However, on a more personal level, he also serves as the archenemy of the knight Sir Orrin Neville-Smythe. They engaged in a rivalry that would last for seven years, culminating in Bryagh's ultimate demise and Orrin's temporary death.

He was voiced by the late James Gregory, who also voiced the heroic dragon Smrgol and Antiquity from the same film, as well as General Ursus from Planet of the Apes.

Prior to the main plot, Bryagh confronts the heroic knight Sir Orrin Neville-Smythe, while devouring a nest of dragon eggs (either out of hunger, gluttony, or simple maliciousness). Orrin confronts the dragon although he remarks that it "seemed a shame to die over an egg" and upon Orrin's attempt to drive him off, Bryagh promptly knocks him out and finishes consuming all but one egg. Upon awakening, Orrin confronts Bryagh before he can eat the last egg and the two foes battle. Bryagh furiously attempt to devour the knight, and Orrin ends up struggling between Bryagh's jaws. Orrin uses the opportunity to create an electrical spark with his gauntlet, lightning Bryagh's volatile inner gas and causing an internal explosion within Bryagh, nearly killing Bryagh him. Bryagh is forced to rest for seven years and regain his strength, before coming into the service of Ommadon in his dark master's quest to destroy mankind. Bryagh grew to despise Orrin in the time when he was wounded, cementing their bitter rivalry which would come to a head once Peter came to the fantasy world.

Now under Ommadon's orders, Bryagh serves as Ommadon's right-hand and mount, coming to be feared by the allies of Carolinus. He is seen several times with the dark sorcerer as he plots to destroy humanity. He comes into direct conflict with the heroes when Bryagh is ordered to find Sir Peter Dickinson and bring him to Ommadon. Bryagh snatches Peter upon ambushing the heroes during a tender moment between Peter and Melisande and starts to fly off. When Gorbash pursues, Bryagh instead spitefully drops Peter to his intended death and flies away.

In the final duel, Ommadon commands the bloodthirsty Bryagh (whose eyes literally shine with the anticipation of leading his horde into battle) to lead a flight of dragons to attack Peter and his friends. After the other dragons are put to an enchanted sleep (including Peter in Gorbash's body), Bryagh ambushes the heroes and mercilessly kills Giles and Danielle. Bryagh ceases his assault temporarily only to cruelly mock Orrin as he grieves for Danielle and his slain friends before the wolf Aragh attacks him. In frustration, Bryagh kills Aragh and tosses his body to the ground, prompting Orrin to rise again. Sir Orrin recites a poetic speech and braves against Bryagh in a last stand. Bryagh insults him, then proceeds to incinerate the knight with a stream of dragon fire. Mortally wounded, Orrin stands his ground and avenges his friends' deaths by tossing his flaming sword into Bryagh's chest while Bryagh lights him on fire. The sword stakes Bryagh and causes an internal explosion within the evil dragon. Now on fire, Bryagh collapses in agony and dies with a final roar of anguish. Now at peace, Orrin peacefully passes as a result of Bryagh's fire. Ultimately, Orrin and all else Bryagh had slain would be restored upon Peter separating from Gorbash and vanquishing Ommadon, rendering all the destruction Bryagh had caused for naught.

Bryagh is a large, somewhat plump dragon with a serpentine, forked tongue, and a small hoary beard. His skin is a mix between steel-gray and ash-black, with a crimson underbelly and several spikes and scales adorning his fearsome visage. He has yellow eyes with black pupils, and sharp claws. Bryagh appears to be very physically capable, as he is capable of killing humans with only slight displays of brute force and was able to kill the wolf Aragh simply by throwing him. Weapons bounced off his hide easily. However, he is vulnerable inside, as a blast from Orrin's gauntlet in his inner belly was enough to render the dragon almost mortally wounded. Like most dragons, he is capable of breathing potent fire, enough to fatally injure a battle-hardened knight in steel armor. However, he is vulnerable to his own fire, as Orrin's sword, coated in his own flame, set the hydrogen inside him ablaze which caused Bryagh's ultimate demise.

Bryagh is relatively simplistic, but memorable, nonetheless. He has only four speaking lines and has limited screen time compared to Ommadon and the other dragons of the movie. Bryagh's defining trait was his brutal sadism. He craves death and violence, cruelly laughing when he killed the friends of Orrin and absolutely relished the prospect of having his armies destroy any opposition, to the point where he seemed anxious for Ommadon to give him the command to lead them into battle.

Bryagh serves the sorcerer, Ommadon, and as such served as his steed and commander. Bryagh is not entirely beholden to Ommadon, though - he willingly ate the eggs of his own kin outside of Ommadon's command, and actively defied his orders by dropping Peter just so he could have a chance to spite the allies of Carolinus, callously wishing that the rocks below would "crush his skull". He appeared to detest humans, seeing as he referred to Orrin and Danielle as "filthy crawlies", and aided Ommadon's quest to destroy humanity, either because he hated the things his master did or simply wanted to kill. Bryagh also seemed to hold onto grudges for long periods of time, seeing as he never forgot the time when Orrin scorned him and relentlessly sought to break the knight, first by killing his friends and love interest.

Bryagh is motivated by little more than a desire to see things burn and die, and happily served Ommadon for these very reasons. He is also a bloodthirsty and treacherous cannibal; he eats the eggs of his own kin. Why is unknown, but it is likely that he feeds on eggs or simply did this for the same reasons he killed everything else he came across. Bryagh's utter disdain for life and surprisingly high body count for a villain in a family-oriented feature cemented him as perhaps one of the cruelest villains in western-made animation (as well as the crowning example of evil in a Rankin/Bass production), despite his small screentime. 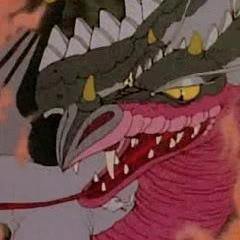 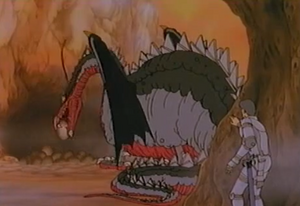 Bryagh eating a nest of eggs. 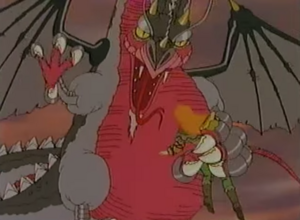 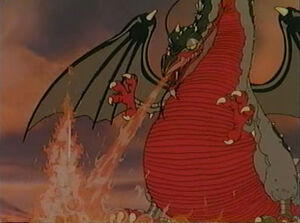 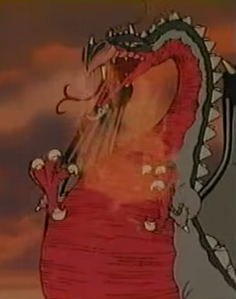