Knowledge of the wilderness

Living in the forest

Abduct Hayley and force her to be his wife

Buckle is a mountain man who first appears in the American Dad! episode "An Apocalypse To Remember," serving as the main antagonist of the episode. He is a retired imangineer from Disney who went into hiding in the forest for ten years due to fearing for a nuclear apocalypse.

He was voiced by Matt McKenna.

Buckle was fearful of an apocalypse and chose to live in the wilderness. When he met with the Smith Family, he was interested in Hayley and wanted her to marry him. Buckle would go to great measures to try and have her to himself such as stalking her, crashing a wedding, and attempting to abduct her. However when his attempt to force Hayley to marry him failed, he decides to marry Shari.

Buckle moved into the wilderness after retiring as an imagineer who worked for Disney. He sets up a treehouse in the wilderness fearing for the apocalypse. When the Smith Family appears, Buckle follows them and stalked Hayley in an effort to abduct her and force her to have sex with him. The Smiths come up with a plan to distract him from Hayley, and they manage to escape from Buckle. Despite leaving, Buckle managed to find the Smiths' location and kept an eye on Hayley.

The Smiths try to help Roger with his marriage to Shari, but the wedding went through, anyways, as the wedding ceremony took place in the Smiths' backyard. Buckle arrives at the wedding in an attempt to kidnap Hayley. He was stopped by Stan, with whom he got into a brawl. Buckle says that he was desperate for Hayley since it was the first time he'd seen a woman in years. Since Roger's marriage with Shari did not go forward, Stan suggests that Buckle marry her instead, which he does.

Since his first appearance, Buckle has been a friend and ally to the Smiths, often appearing at special occasions they've hosted, or sometimes hosting his own special events and inviting the Smiths to attend. He and Shari even moved from the wilderness to Langley Falls to be closer to the Smiths. 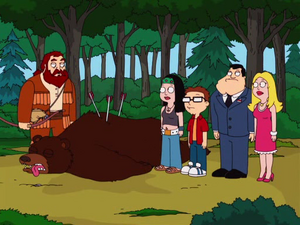 The Smiths meet Buckle, who has saved them from a bear. 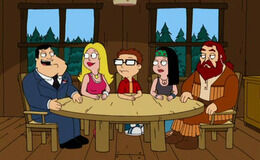 The Smiths sit down at table to talk with Buckle.
Add a photo to this gallery

Retrieved from "https://villains.fandom.com/wiki/Buckle_the_Mountain_Man?oldid=4154515"
Community content is available under CC-BY-SA unless otherwise noted.