To work for Vandal Savage

Sheriff Bud Ellison is the corrupt sheriff of Harmony Falls. He is an associate of Vandal Savage and an antagonist in the series Legends of Tomorrow.

He was portrayed by Daryl Shuttleworth.

Arriving at Harmony Falls in the 1950's, Rip Hunter and Leonard Snart disguise themselves as FBI agents to find out whether Vandal Savage is around. They arrive at the police precinct, where they meet Sheriff Ellison. They tell him that they want to investigate the serial murders at Harmony Falls but Ellison tells them to slow down, claiming that they have no serial killer but merely some disappearances. Rip and Snart states that they will decide for themselves and demand the case files from Ellison which the sheriff hands over.

After Jax, who has been meeting with the girlfriend of one of the missing teenagers, has been attacked by hawk-beasts, he tries to drive the wounded girl to the hospital. On the way, they are stopped by Sheriff Ellison. After Jax leaves the car, Ellison demands to know why Jax' car looks so demolished. Jax ignores the question, telling Ellison that he needs to bring the girl to the hospital and that there are two more wounded on Lover's Lane. However, Ellison focuses on Jax and asks him what he did with the girl on Lover's Lane. Realising that reasoning is useless, Jax turns to enter his car and drive the girl to the hospital but is then attacked from behind and knocked out by Ellison. Ellison drags Jax into his car and drives off, leaving the bleeding girl behind.

Jax awakes in the asylum, strapped to a chair. Ellison stands next to him and Jax is about to rant about police brutality but they are then joined by Vandal Savage. Savage sends Ellison out of the room and injects Jax with part of the meteorite, causing the young boy to turn into one of Savage's hawk-beasts. Savage is then disturbed by Ellison, who returns to reveal that Kendra is waiting for Savage upstairs. Upon seing the beast Jax has become, Ellison swiftly storms out of the room. Savage also leaves the room to meet Kendra in his office.

When Rip and Snart try to save Kendra from Savage, they are stopped by Ellison who sarcastically asks why two FBI agents are sneaking through the "loony-bin". He holds them at gunpoint, stating that they have some explaining to do down at the station. However, while bringing them out of the asylum he is attacked by one of the hawk-beast, as Savage let his subjects loose on the asylum. He is hit in the throat by the beast's talon and falls to the ground, dead. 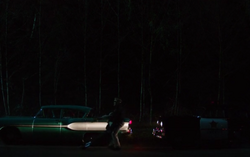 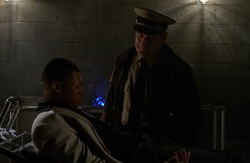 Jax wakes up at the asylum 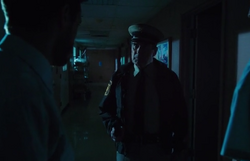