He is a professional criminal and the husband of Darling who are both members of a crew of armed robbers led by Doc. Over the course of events, Buddy is shown to be the most experienced member of Doc's crew whilst also appearing to enjoy robbing banks with Darling to settle their financial futures on a planned vacation.

The character was portrayed by Jon Hamm, who also played Herb Overkill in Minions and Don Grouper from SpongeBob SquarePants.

Robbery to the Bank

Buddy opens the film by robbing a bank with Darling and Griff, before making an escape in a Subaru WRX getaway car driven by Baby. They return to Doc's hideout, where they are seen making out and defending Baby from Griff's insults. Before leaving, Buddy jokingly tells Baby to ignore Doc's next call.

Buddy and Darling are later hired again by Doc to do a job at the United States Postal Center with Baby and Bats. The four attend an arms deal, but Bats realises that the arms dealers are undercover cops and starts a shootout, during which Darling is wounded. They later eat at a diner, which they meet a waitress named Debora.

Baby attempts to leave, but Buddy stops him. Empathic to Baby's plight, he tells Baby that he would let him leave if he was starting to get cold feet on the job. Bats then reveals that Baby had been recording conversations between the gang, but Baby manages to prove that he was only making mixtapes.

On the day of the robbery, Baby snaps and kills Bats by crashing the car and impaling Bats on a metal rebar. He escapes on foot while Buddy and Darling fend off the police and hotwires a car, but ends up crashing into Buddy and Darling's car. As they prepare to escape together in Baby's car, they are cornered by the police. Darling is promptly shot dead. Buddy is driven to a rage and starts firing at the police and Baby, who escapes again on foot.

Buddy finally escapes the police and returns to the diner, where Buddy is waiting for him. Buddy threatens him and Debora, but Baby takes advantage of a moment's distraction and shoots Buddy in the chest. Buddy kills a police officer and escapes, pursuing Baby and Debora.

He later corners them in Doc's hideout and runs over Doc when he attempts to defend them. Baby and Debora get into another and ram Buddy's car off the parking lot floor, but Buddy manages to escape. He holds Baby at gunpoint before firing right next to his ear, deafening him. Debora then attacks him and Baby shoots him in the leg, causing him to fall to his death. 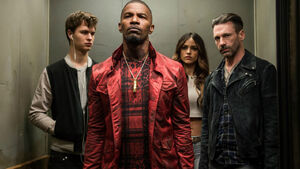 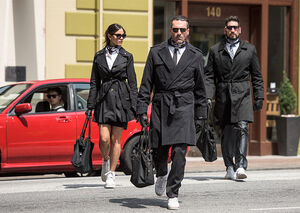 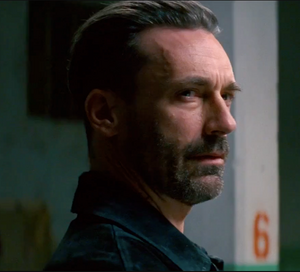 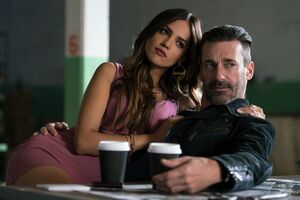 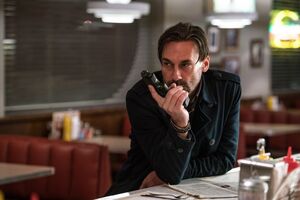 Buddy falling to his death.