Leader of his army
Tendai's arch-nemesis

Get him and his lizard army get into Zambezia (partially succeeded, but later failed).

Eat all of the eggs in Zambezia (failed).

Budzo is the main antagonist of the 2012 South African computer-animated film Zambezia (also known as Adventures in Zambezia).

He was voiced by Jim Cummings, who is known for voicing other villains.

Budzo is a rock monitor lizard who forces birds to work for him and is intent on taking over Zambezia to eat all of the eggs. He is responsible for the death of Kai's mother, which is why Kai's father, Tendai, is overprotective of his son. Budzo lost a claw from his previous failed attack, but he will do anything to return to Zambezia and claim his vengeance against the Zambezians.

Budzo and his Marabou henchmen kidnap Tendai as he refuses to let anyone stand in his way. He orders his henchmen to capture all the weavers and forces his imprisoned birds to build him a bridge leading all the way towards Zambezia. When he finally succeeds in taking over Zambezia after Kai saves his dad, Budzo betrays his henchmen and unleashes his army of lizards.

The betrayed Marabou decide to team up with the Zambezians and defeat the lizards by splitting the bridge in half. Kai plans to use the eggs to lure Budzo further up Zambezia, cornering him on the water wheel. With the assistance of every Zambezian, the water wheel is detached, sending Budzo plummeting to his death over the edge of Victoria Falls. He attempts to take Chief Sekhuru's daughter, Zoe, with him, but she is saved just in time by Kai.

Budzo is very sinister, sadistic, manipulative, and arrogant in every nature. He is a cruel and oppressive monitor lizard who infrequently makes him and his lizard army get in Zambezia to eat all of the eggs. He feels absolutely no remorse for his crimes, and delights in them. This is shown as when one of the captive birds tells him he's a monster, he answers simply: "Thank you. One does what one can." He also has no problems betraying the Marabouts after they were no use to him anymore, leaving them to be eaten by his fellow lizards, even if they helped him with his plan. Unfortunately for him, this treason was his downfall, as the Marabouts helped the birds to defeat Budzo.

Budzo is a massive, chubby green monitor lizard with a white underside and orange eyes. His middle toe on his right front foot lacks a claw, as he lost it during his first attempt to conquer Zambezia. He also has some scars on his face, presumably from his failed raid as well.

Despite looking chubby, Budzo is very strong and powerful, as he is shown throwing birds across the trees of Zambezia during his raid. Budzo is also very tough, being able to resist most of the birds' attacks with minor effects, and it took almost the entire population to overpower him over the waterfall. 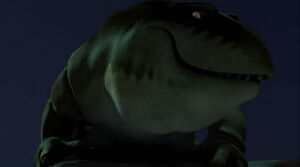 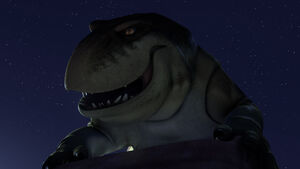 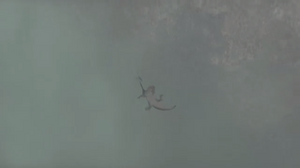 Budzo falling to his death. 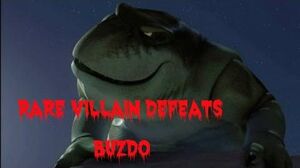