Killing women and make suits of their skin in order to become a woman.

Escape from the hands of the FBI.
Resume killing women to make suits from their skin in order to become a woman.

Jame Gumb, better known as Buffalo Bill, is the main antagonist of the 1988 Thomas Harris novel The Silence of the Lambs and its 1991 five Academy Award winning film adaptation. He is a serial killer who kidnaps women and makes "person suits" of their skins. He is perhaps most famous for his line, "it rubs the lotion on its skin or else it gets the hose again".

Buffalo Bll is based on an American murderer and body snatcher Ed Gein, who also inspired Leatherface from The Texas Chain Saw Massacre and Norman Bates from Psycho, as well as five other serial killers.

He was portrayed by Ted Levine, who later played Karkull in Superman: The Animated Series and Ken Wheatley in Jurassic World: Fallen Kingdom.

Gumb kidnaps overweight women so he can starve them. He starves them so that their skin is much looser so after he murders them he can more easily remove their skin to fashion a "woman suit" for himself.

He considers himself transgender, but is too disturbed to qualify for sex reassignment surgery. Hannibal Lecter theorizes that Gumb is not really transgender, but believes that he is because he "hates his own identity".

He becomes known as "Buffalo Bill" during his murder spree because of an off-color joke by Kansas City homicide detectives; upon discovering his first victim, the detectives say "This one likes to skin his humps.".

Biography in The Novel

The novel reveals that Gumb was born on 1948 in California, and was abandoned by his mother — an alcoholic prostitute who misspelled "James" on his birth certificate — and was taken into foster care at age two. He lived in foster homes until the age of 10, after which he was adopted by his grandparents, who became his first victims when he impulsively murdered them at the age of 12.

After killing his grandparents, he was transferred into a juvenile facility in which he learned to become a tailor. After being released when he was 19, he went on to serve in the Navy. After his military service, Gumb began a relationship with a young man named Benjamin Raspail.

Raspail found out that Gumb had murdered a sailor named Klaus, another of his lovers, and "done things" with the skin. Raspail referred Gumb to his psychiatrist, Hannibal Lecter. Following a session with Lecter, Gumb became obsessed with becoming a woman. He applied for sexual reassignment surgery at Johns Hopkins Medical Center, but he was rejected because of his psychosis.

Gumb began a relationship with a young woman named Fredrica Bimmel. After she left him, he killed her impulsively, removed pieces of skin from her back and weighed down her body in a riverbed. He then got the idea of creating a "woman suit" so he could, in his mind, become female.

In the 1991 Film Adaptation and Death

Gumb's modus operandi is to kidnap a woman by approaching her pretending to be injured, asking for help loading something heavy into his van, and then knocking her out in a surprise attack from behind. Once he has a woman in his house, he starves her until her skin is loose enough to easily remove. In the first three cases he leads the victims upstairs under the belief that they were to be offered a shower, and slips a noose around their necks and pushed them from the stairs, strangling them. In the case of the fourth victim, he shoots and skins her, places a Death's Head moth in her throat and dumps the body.

He is fascinated by the moths' metamorphosis, a process he wants to undergo by becoming a woman. In one of the film's more infamous scenes, he dances around with his penis tucked between his legs, wearing a silk cape which he flourishes like butterfly wings. Gumb thinks of his victims as things rather than people, often referring to his victims as "it", e.g., "It rubs the lotion on its skin, or else it gets the hose again."

The FBI intensifies the manhunt for Gumb when he kidnaps Catherine Martin, the daughter of Republican U.S. Senator Ruth Martin. Then-FBI trainee Clarice Starling enlists Lecter's help in tracking Gumb down, as Lecter had met Gumb while treating Raspail. Lecter gives Starling a series of cryptic clues to Gumb's identity, but never reveals his name in hopes that Starling will figure it out for herself. She eventually deciphers one of the doctor's riddles — "We covet what we see every day" — and realizes that Gumb knew his first victim, Bimmel.

Starling convinces her mentor, FBI Director Jack Crawford, to allow her to follow up on the lead. She travels to Belvidere, Ohio, Bimmel's hometown, to question her family and acquaintances. Over the phone she is informed that the FBI has learned the name of the killer and is deploying to Calumet City, Illinois with the FBI Hostage Rescue Team to take him down.

Starling, meanwhile, goes to the house of a Mrs. Lippman, Bimmel's elderly employer, only to find Gumb himself, calling himself "Jack Gordon". Following the elderly woman's death, Gumb inherited her house and began using it as a torture chamber for his victims. Starling realizes who he really is when she sees a Death's Head Moth flutter by, and orders him to surrender. Gumb flees into the basement with Starling in pursuit, and then cuts power to the basement and stalks her with night vision goggles. As he cocks his revolver, Starling instinctively fires at the sound, killing him. Martin is rescued, and Starling becomes a heroine, as well as a full-fledged agent.

Jame Gumb, although intelligent, showed signs of violence at a young age when he murdered his grandparents at age 12. Due to being abandoned by his mother and other unpleasant experiences during childhood, he developed a delusion that he was transgendered and desired to transition. However, due to his early murders, attacks on gay men, and personality tests, he did not meet the requirements as transsexual. Benjamin Raspail, his former lover, described Gumb as neither being gay or transsexual, but as an extremely disturbed man who had no sense of self and took on any identity that he felt suited him at the time. This suggests an extreme form of Borderline Personality Disorder.

One of his more disturbing personality traits is that he did not view people as beings with feelings. He referred to his victims as things or creatures, in order to make it easier to kill. He showed sadistic delight in hunting his victims in his basements, enjoying the distress he was causing as they wandered aimlessly in the dark. However, Gumb was not averse to feelings. He loved his mother, despite his awful upbringing. He did enter relationships with Raspail and later on Frederica Bimmel, the first in the "Buffalo Bill" killings. He also adored his poodle called Precious, and would have her close by him at all times. When Precious was kidnapped by Catherine Martin, he was distraught and was brought to tears, and threatened to kill Martin should she harm Precious. He also harboured obsessions, such as his desire to be a woman and a keen interest in moths and butterflies, their transformations inspiring him to commit murder.

Despite his delusional and psychotic episodes, he showed to be an intelligent, ruthless man. He was proficient at disguise, using many false aliases to hide his true identity. He often pretended to be injured to lure women into his van, wearing an arm cast with a crow bar hidden in it. He was an excellent tailor, using his experience from his previous employment to gruesome effect as Buffalo Bill. He also had forensic knowledge, knowing that dumping his victims into water removed any trace of him. 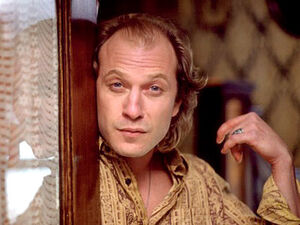 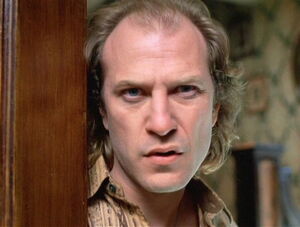 Retrieved from "https://villains.fandom.com/wiki/Buffalo_Bill?oldid=3497665"
Community content is available under CC-BY-SA unless otherwise noted.