Destroy the world and forcibly assimilate everyone into the "Paradise Guardia" virtual reality.

Brute
Buga is a high-ranking member of the Thinknet cyber-doomsday cult and a major antagonist in Kamen Rider Zero-One: REALxTIME.

His digital avatar is a muscular man. Using a special Abaddonriser, Buga transforms into a customized Kamen Rider Abaddon.

On the day of Thinknet's global assault, Buga led a team of Kamen Rider Abaddons alongside Lugo in gassing people with nanomachines so they would be assimilated into the virtual world. They were soon confronted by the forces of A.I.M.S., but easily got the better of them thanks to their superior numbers.

While Buga and the other Abaddons were able to hold the other Riders at bay, Zero-One got past them and went to confront S in the arena Thinknet had taken as their base. During the fight, S brought down his modified Thousand Jacker and created an explosion that leveled the arena. When the smoke cleared S had disappeared without trace, leaving the members of his inner circle mystified as to what had happened. While Bell led a group of remaining Thinknet members to S's location, Buga and the other high-ranking Abaddons faced off against the AIMS and MetsubouJinrai.NET Riders.

As Zero-One and Zero-Two attempted to stop S and Bell from bringing about doomsday, Buga and the other two Thinknet leaders led the remaining Abaddons against Kamen Riders Vulcan, Valkyrie, Horobi, Jin and Thouser. When S had a change of heart and attempted to shut down the Thinknet servers, Buga appeared and attacked him. Horobi then intervened and held off Buga, enabling S to go and reunite with his loved one. Buga later fought both Horobi and Jin, and was defeated by their combined finishers.

After doomsday was averted, Buga was tracked down and arrested by the police. 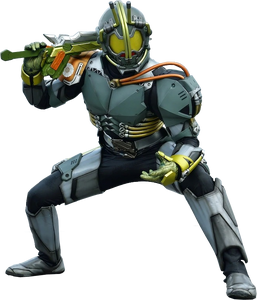 Kamen Rider Abaddon (Buga)
Add a photo to this gallery

Retrieved from "https://villains.fandom.com/wiki/Buga?oldid=4305049"
Community content is available under CC-BY-SA unless otherwise noted.