Villains Wiki
Register
Don't have an account?
Sign In
Advertisement
in: Monsters, My Little Pony Villains, Fantasy Villains,
and 11 more

Get revenge on Agent Sweetie Drops/Bon Bon For Imprisoning him in Tartarus (assumed).

Feral Hybrid
The Bugbear is an antagonist from the animated television show My Little Pony: Friendship is Magic, first appearing in the 100th episode of the show and the 9th episode in Season 5 entitled "Slice of Life".

As his name suggests, Bugbear appears to be a hybrid between and insect and a bear. He possesses a bear's body with the fur coloring of a panda, along with two additional arms, as well as insectoid antennae, wings, and the stinger of a hornet.

The Bugbear is an extremely destructive, formidable, and powerful creature, as he was able to hold his own against the Mane 6 throughout the whole episode, though he was eventually defeated.

Years before the events of the episode, The Bugbear was captured and imprisoned in Tartarus by the secret agent Sweetie Drops, member of a secret anti-monster agency located in Canterlot, but he managed to escape and the agency was disbanded because of him. Sweetie Drops then moved to Ponyville under the new identity of Bon Bon.

In the episode "Slice of Life", The Bugbear assaults Ponyville, trying to get revenge on Bon Bon (or at least she thinks that's the reason why he's there). The Mane 6 spend the entire episode fighting him while the rest of Ponyville tries to prepare for Cranky and Matilda's wedding. In the conclusion of this episode, Bon Bon announces that the Mane 6 have defeated the Bugbear, but his fate remains ambiguous until the episode In School Raze - Part 1, where it's revealed that the Bugbear is back in his cell in Tartarus.

Ocellus briefly morphs into a bugbear in School Daze - Part 2.

In A Matter of Principals, Discord summons the Bugbear to attack and chase the students during P.E. class.

In School Raze - Part 1, the Bugbear appears imprisoned in Tartarus. In Part 2, Twilight uses the natural magic inside the bugbear so she and her friends can escape, temporarily separating the bugbear into a panda bear and a bumblebee. 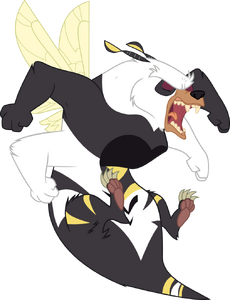 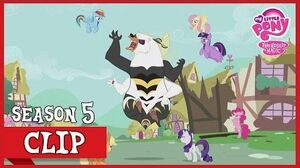 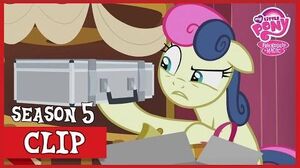 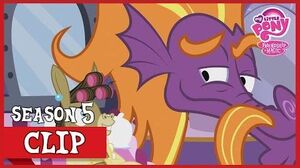 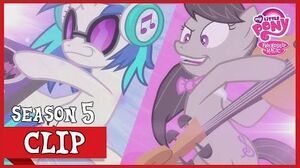 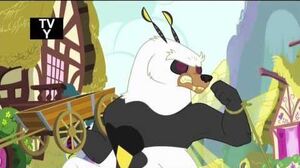 The mane six vs the Bugbear. Bugbear