Enjoying the delights of heroin.

To get rid of Sheldon Mopes (Smoochy the Rhino) and have his show Buggy's Bumpy Railroad and himself back on the air.

Buggy Ding Dong (as he called himself or that is his real name, though his real name is unknown) is a supporting antagonist in Death to Smoochy. He was the former host of Buggy's Bumpy Railroad until he discovers the "joys" of heroin and became a smack addict.

He was portrayed by the late Vincent Schiavelli.

Buggy was the host of his old show Buggy's Bumpy Railroad where he was also dressed as a railroad train conductor on the Kidnet network.

That is until he found some "joys" in heroin. When he was discovered with his unusual behaviors, and his unhealthy addiction, he was fired and arrested.

Buggy finally resurfaced when he got a deal from both Burke and Frank Stokes. He was late to the rendezvous due to falling asleep at the bus station and possibly (for unknown reasons) has the odor of urine when he arrived. He wanted vodka when he was asked what to drink. In order to get him back on television, all they both need from Buggy is to get rid of Sheldon Mopes (Smoochy the Rhino) and take his place. While being instructed to assassinate Smoochy, he was dosing off and after being woken up, he (due to being high on heroin all the time) was seeing multiple pretty lights in the air.

One night, Buggy got himself back into the Kidnet HQ and appeared before his old acquaintance, Nora Wells, who is utterly sick of him. He tells her that he will take over Sheldon's place (and says he will rise like a phoenix, or some other town in Arizona) and have himself back on the air, before he tried to pull a move on her. But Nora says "Back off, Dracula!". Buggy tells her to keep in touch before he disappears.

Nora explained to Sheldon that Frank Stokes is involved with the plot to kill him and hired Buggy Ding Dong to help carry out the plan in order to replace Mopes. When Mopes questioned Buggy being the former host of "Buggy's Bumpy Railroad," Nora said that was true until he "discovered" the joys of "Turkish Black Mule" Heroin. This prompted Sheldon to load his revolver Burke gave him and kept the revolver on him hidden in his costume before, during, and after the ice show (after leaving Rainbow Randolph in the penthouse until things are sorted out with the police and when Rainbow Randolph recovers).

Buggy later arrived at his old associate Angelo Pike's apartment, tied him up and stole his backstage pass in order to gain access to the ice show performed by Smoochy and the Rhinettes. After getting a soft pretzel (without salt due to Sheldon's healthy regulations, to Buggy's dismay), Buggy got on the bridge above stage in the stadium. He assembled the sniper rifle while at the same time, dosing off. Nearing the end of the show, Buggy has his sniper rifle all set up as he is about to kill Smoochy. Luckily, he failed when Rainbow Randolph, fellow children's TV host stopped him. But both of them were later hanging on the edge. Buggy then had his hands slipping and fell. He died landing on the ice rink. 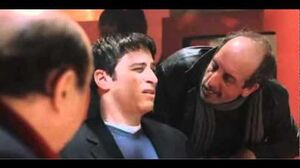 Before he is ready to began shooting Sheldon Mopes, Buggy was last seen in the restroom, smoking and sniffing heroin. As Sheldon says, Buggy Ding Dong is nothing more then a mere smack addict.