Villains Wiki
Register
Don't have an account?
Sign In
Advertisement
in: One Piece Villains, Pirates, Contradictory,
and 42 more

Captain of the Buggy Pirates

Collect and plunder treasures, and lots of them.

Be a famous star.

Buggy the Star Clown (in Japanese: 道化のバギー, Senryō Dōke no Bagī), also known publicly as Buggy the Clown, is a clown pirate captain and one of the first antagonists in the manga and anime One Piece. He was the captain of the Buggy Pirates, whose members looked like circus performers (excluding Alvida, a former pirate captain who joined Buggy's crew seeking mutual revenge on the series protagonists, Monkey D. Luffy). However, said crew abandoned him after he was arrested and sent to Impel Down, the most impenetrable prison in the One Piece world, and tearfully gave up on any hope of rescuing him.

However, Buggy managed to escape from Impel Down and acquired a new following comprised of dozens of powerful prisoners of Impel Down, all of whom are hopelessly blinded by Buggy's extraordinary past. After the Summit War, his old crew members rejoined him, and he was invited to become a member of the Shichibukai. With his newly acquired powers and privileges, he established the Buggy’s Delivery mercenary group and set up his headquarters in the New World. With the abolition of the Shichibukai system, he became a wanted man once again.

He first appears as the main antagonist of the Orange Town Arc, but later becomes a major ally during the Impel Down Arc and the Marineford Arc.

He is voiced by Shigeru Chiba and Subaru Kimura as a child in the original Japanese version, Brian Zimmerman in an Odex English dubbed, David Wills in 4Kids English dubbed and Mike McFarland in the Funimation English dubbed version.

Buggy was originally an apprentice on board the ship of the former Pirate King, Gol D. Roger (called Gold Roger by most characters), along with Shanks, who is another major character in the One Piece story. He and Shanks would argue constantly, usually over trivial things like whether the North Pole or South Pole is colder.

However, once their crew got a hold of a Devil Fruit, which are said to be cursed fruit that gives whoever eats them incredible powers at the cost of never being able to swim again. Said fruits are very valuable, so Buggy gets a plain to steal the fruit, and a treasure map the crew recently found, so he'll have the proper funding he'll need to find all the treasure he wants. When Shanks suddenly shows up, Buggy hides the fruit in his mouth, then accidentally swallows it. In his rage at Shanks, he also loses the treasure map, tries to go after it, but nearly drowns trying to get it and ends up having to be saved by Shanks. Since then, he's held a huge grudge against Shanks.

Before Roger was executed and the crew disbanded, Buggy witnessed his captain's public execution and broke down in tears. Afterwards Buggy and Shanks went their separate ways, though Shanks offered Buggy to join his crew, but Buggy refused to work under him. Interestingly enough, as apprentices, Buggy told Shanks that he would make a terrible pirate, as he called him "soft". Ironically, while Buggy struggled to become a pirate captain in his own right and is relatively weak compared to the pirates of the Grand Line, Shanks is among the first strongest and most feared pirates of all, the Four Emperors (四皇, Yonko).

Buggy key motivation for the things he does is obtaining treasure, and lots of it. This is why he dislikes Shanks, because he lost a "precious treasure" because of him. After his initial defeat from the hands of Luffy, one of his main goals is also to get his revenge and defeat him once and for all. He has also been seen looking for the lost treasure of Captain John, which is why Buggy agreed to help Luffy in Impel Down (Luffy was wearing an arm band which was actually captain John's treasure map that he had been looking for). Recently, a new goal had arisen: due to the Marines labeling him a major threat, and with the support of his new crewmates, he decided to attempt to take the head of Whitebeard, the strongest pirate in the world.

Buggy was then shocked to hear that Luffy's father was really Revolutionary Dragon and was left speechless by this news. He allied with Whitebeard for support on the promise of allowing him to take his head later.

When Whitebeard is killed by the Blackbeard Pirates, Buggy tried to flee but unwilling played a role in saving Luffy and Jinbe after Crocodile threw them in the air to get away from Akainu. He reunites with Shanks and returns Luffy's hat before deciding to escape with Shanks.

Buggy reunited with his old crew and with his new one, his numbers expanded and became even more powerful.

Following the Levely Closure, Buggy discovered that he and the other Shichibukai had been dissolved as they sent Marines to arrest him. Buggy has no other choice about to fight their way to escape.

While Buggy is a formidable fighter (he's been able to hold his own as an apprentice, fighting the Whitebeard pirates from time to time along with the rest of his crewmates), his arrogance and greed get the best of him and he doesn't fight to his fullest potential. And while he was a considerable villain with the series started out, he has become less and less of a threat when more powerful villains were introduced (during the Impel Down arc, former Baroque Works members have pointed out how weak and cowardly he is).

One of his main abilities includes the powers of the Chop Chop Fruit (バラバラの実, Bara Bara no Mi), which allows him to separate his body parts and controls them as he wishes, usually by levitating them away from his body. This also makes him immune to cutting and slashing attacks. However, his feet have to remain grounded in order for it to work properly. In addition, his body parts can only float/fly a certain distance away from his core body or his feet (i.e., Luffy has to carry Buggy feet in order for him to fly away). Also, he can still feel what happens to his separated body parts, and he can end up losing them if they aren't in sight.

Buggy also uses a number of bladed weapons, particularly knifes. He tends to hold either one knife at a time or three knives in one hand. He also has blades in his shoes, which he can use to throw his legs and cut his opponent, like a buzz-saw. Buggy's posed prized weapon, though, is the Special Buggy Balls (特製[とくせい]バギー 玉[だま], Tokusei Bagī Dama), which are capable of destroying an entire town. In the Impel Down arc, it is revealed that he was able to compact the power of a Buggy Ball into a smaller portion which he calls the "Muggy Ball".

According to Commodore Brannew, Buggy became stronger for two years. 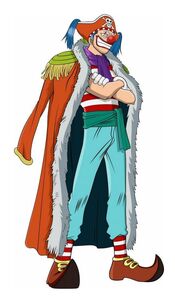 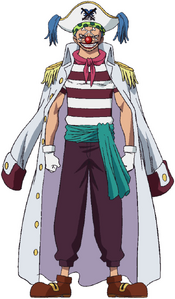 Buggy's concept art from the anime with Marineford's clothes. 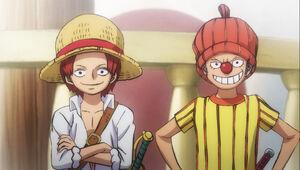 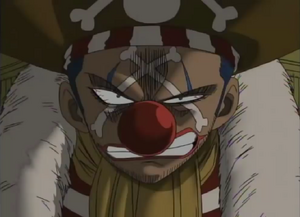 Shot of Buggy in We Are!. 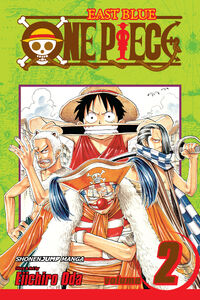