Alpha-male of the dragons

Breeding with females.
Killing his prey.

Wipe out all of humanity (almost succeeded, but then failed).

Destructive Dragon
The Bull Dragon, also known as the Male Dragon or the Alpha Dragon, is the main antagonist of the 2002 film Reign of Fire. He is the alpha-male and leader of his race as well as the sole surviving male while all of the other dragons are females. He is also responsible for the death of Quinn Abercromby's mother back in the early 21st century after a group of construction workers inadvertently awakened him.

It's not explicitly stated whether the Bull was hatched during the end of the Mesozoic era or during the Ice Age, only that he's one of the most persistent male of his race unlike others who are either perished from conflicts against humans, died challenging him over the position as alpha male, or both. Regardless, he was the first dragon who was awakened upon being disturbed by construction workers who inadvertently stumbled upon his dormant form on the London Underground many years later. Angered by the intrusion, the Bull Dragon fought his way out to the surface and killed everybody else who were unfortunately enough to be in his path. A boy named Quinn was the only one to survive the carnage and was left traumatized due to having his mother been killed by the dragon.

In 2020, the Bull Dragon has become the alpha of the entire dragon race (if not only his brood), having outlived other males and all females for himself. He and his brood established a nest over the ruined London, right near a cavernous system where he originally laid dormant. Scars that littered throughout his body suggested that he spent a lot of his life fighting alongside his kin in overthrowing humanity as the most dominant species on the planet. Unfortunately, having burned more than they can feed on in the process coupled with their heightened metabolism, the dragons gradually resort to cannibalize one another. Even so, being the most powerful and experienced, no females nor males (if any) dared to face him and although Quinn, now an adult, didn't see his battles, understandably afraid of him and implored his band of survivors to hide rather than challenging the Bull Dragon's might.

True to this, when Van Zan and his men decided to hunt and kill the Bull Dragon, the beast revealed to have one step ahead of them; he toyed with the group for weakness and successfully ambushed them, scrambling the convoy and killing many of his men. Falsely believing them to be sent by Quinn's community, the dragon attacks his castle and incinerated the people within as revenge. Although Quinn managed to evacuate his people into the castle's bunker, the Bull Dragon managed to kill Creedy and several others in the ensuing onslaught, which was more than enough to convince him to overcome his fear and end the dragon's reign of terror.

As Van Zan, Quinn, and Alex infiltrated the Bull Dragon's territory, the trio witnessed him devouring a smaller female and realized their enemy's miserable state. As they close in for his position, the Bull Dragon predictably detected the humans first and attacks, prompting Van Zan to challenge the beast head on while Quinn lost his own explosive bolt when the beast scrambled them. Only managing to briefly disorient the beast with his own bolt, Van Zan attempted to attack the Bull Dragon with his axe, only to be swiftly devoured. The dragon then confronts Alex as Quinn retrieves the bolt and loads it into his own crossbow. Before the Bull Dragon could kill Alex however, Quinn managed to direct the beast's attention to him, leading into a stand-off that culminated him to fire his explosive bolt straight into the dragon's mouth, rupturing the beast's volatile glands from the inside out and decapitating the monster in a double explosion, finally killing the Bull Dragon and avenging Quinn's mother, Creedy and all those he had killed in the past.

As with the other male dragons, the Bull Dragon has a shorter snout, longer head horns, smaller cheek horns and larger lower jaw horns. Being the oldest and presumably the last remaining male in existence, he had grown considerably larger with scars throughout his body and has leathery wings that are rather tattered both by age and fights in his lifetime.

The Bull Dragon is an aggressive, persistent and domineering beast with great intelligence to boot. While most of his brethren tend to leap into battle and make reckless decision in fighting humans at times, the Bull Dragon silently observes his foes and thus is able to make the best course of actions. Not only he managed to outsmart and even determine weak points of an army platoon, but also becoming the most enduring male in his generation. The Bull Dragon also displayed a vengeful side as in retaliation of Van Zan's ill-fated attempt to kill him and massacred an entire castle where Quinn and his community lived at as a warning.

As with other dragons, he developed hostility towards other dominant species on the planet, particularly ones that can fight back. The Bull Dragon and his brethren have come close in decimating humanity and thus more than eager to make his race the most dominant one. Yet, he doesn't seem to take account of the possibility of collateral damage they cause in the fight against humanity won't bode well to the rest of life on Earth, which became their downfall as without more prey, he and the rest of the dragons ended up resorted to cannibalism. The most crippling blow comes from his death which left no more males to fertilize his brethren's eggs, resulting their extinction.

As the biggest, strongest and most enduring of dragons, the Bull Dragon is a terrifying opponent for even most skillful of humans. Like all members of his kind, he can breathe fire for offensive purposes such as in forms of small fireball bursts to streams of flame. He is also much resistant to weapons that can make a dent to dragons' scales, but can still be injured nevertheless. While flying, the Bull Dragon displayed great agility and speed, as he is able to evade oncoming attacks as well as remain stealthy despite his great size which supposedly makes him an open to attack. Lastly, having spent most of his time fighting for survival and becoming the male alpha, the Bull Dragon has developed into the most cunning and experienced of his brethren.

True to Van Zan's statement, the Bull Dragon is by no means invincible. As with his kin, he cannot see pretty well through extreme heat as much as during the twilight. Also, whenever he's about to breathe fire, his volatile glands rendered susceptible since he has to open his mouth to do so. Because of his great experience and intelligence however, it took a slight mistake in his own part for Quinn to eventually kill him in the end. 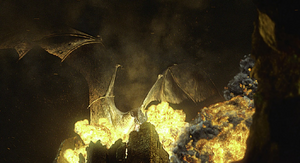 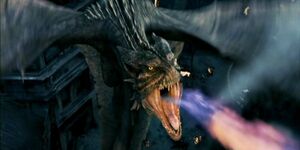