The Great Sage Who Pacifies Heaven

Leader of the demons (Doraemon: The Record of Nobita's Parallel Visit to the West)

Get revenge on Sun Wukong for turning his son, Red Boy (failed).

Take back the Iron Fan (succeeded briefly).
Eat Doraemon and his friends (Doraemon: The Record of Nobita's Parallel Visit to the West).

The Bull King (in Chinese: 牛魔王), also known as the Bull Demon King or the Ox-King, or as his self-proclaimed title The Great Sage Who Pacifies Heaven (in Chinese: 平天大聖), is a major antagonist of the 16th-century Chinese classic novel Journey to the West by the late Wu Cheng'en, and its multiple adaptations. He can actually be considered to be the main antagonist of the story, despite his limited appearances. He also appears in the film Doraemon: The Record of Nobita's Parallel Visit to the West as the main antagonist. He is one of the most popular Journey to the West villains, alongside his wife Princess Iron Fan, his son the Red Boy, the Six Eared Macaque, and the Baigujing. Bull King is based in the Sky Scraping Cave (in Chinese: 摩雲洞) on Accumulated Thunder Mountain (in Chinese: 積雷山).

In the classic 1986 adaptation series of Journey to the West, he was primarily portrayed by Wang Futang. However, during his early scenes as Sun Wukong's friend, he was portrayed by Yan Huaili, who also played Sha Wujing (one of the four main protagonists) in the same series. In Doraemon: The Record of Nobita's Parallel Visit to the West, he was voiced by Hidekatsu Shibata.

In his humanoid form, the Bull King is a muscular anthropomorphic ox who wears armors and a cape. Being a monarch, he also has a crown on his head. In the original novel, his true form is depicted as a titanic white ox (having eyes as size of a moon or a sun look from Earth). However, in the 1986 adaptation, his true form is just a big gray ox. In the movie Doraemon: The Record of Nobita's Parallel Visit to the West, the Bull King is described as gigantic, whose size dwarfed most, if not all of the other characters in the movie. His armor also has a red Chinese character that means "King" in the center.

As a typical Journey to the West demon king, Bull King is extremely aggressive, violent, and wrathful. He likes to commit assault and eat humans. Once Sun Wukong's sworn brother, Bull King is now his greatest enemy, vows to kill Wukong at all cost to avenge his son and wife. However, even as Wukong's friend, he befriended the latter mainly because Wukong is evil at the time, and powerful. Thus, Bull King is always a villain from the start, only to become more evil as the story progress.

It should be noted, however, that unlike most of the demons in Journey to the West, the Bull King is not outrightly malevolent, but rather a vengeful person who just wants revenge on Sun Wukong for turning his son, the Red Boy, to the good side. Despite his brutal nature, the Bull King genuinely cares about his family, as not only tried to avenge his son, he also tried to avenge his former wife, Princess Iron Fan, despite the fact that the two had been divorced. In the end, he also shown remorse upon being subdued by the deities, though this partially was to save his own skin.

In Doraemon: The Record of Nobita's Parallel Visit to the West, Bull King is portrayed as a sadistic tyrant, who has no problem of killing and eating innocent people. Though he wasn't shown being protective towards his wife and son here, it's presumed that he still retains those traits, regardless of being depicted as more evil.

The Bull King is a demonic ox who befriended and being the sworn brother of Sun Wukong along with other five demon kings, and was ranked the most senior of the seven. Upon hearing that Sun Wukong had successfully got the title of "The Great Sage Equal to Heaven", he along with other demon kings went to meet him to celebrate the stone monkey's victory. When Wukong told the six demon kings to get their own titles, the Bull King was the one who speaks first, proclaimed himself "The Great Sage Who Pacifies Heaven". The seven sworn brothers had fun in the party for one day, before heading back to their caves.

Sometime during Sun Wukong's imprisonment for 500 years by the Buddha, the Bull King eventually married Princess Iron Fan and gave birth to the Red Boy.

Bull King first appeared as a disguise of Sun Wukong to trick Red Boy into release Xuanzang. However, upon seeing that this "Bull King" does not remember his birthday, Red Boy deduced that he is a fake one and blew his cover as Wukong. Though wasn't physically seen, the Bull King was going to be invited by his son to eat Xuanzang, and was mentioned numberous times, and the fact that the Red Boy mistook Sun Wukong's disguise with him gave an evidence about the Bull King's appearance.

Later on, in the Women's Country (in Chinese: 女兒國), Immortal Ruyi (in Chinese: 如意真仙) mentioned that he's Bull Demon King's brother, and vowed to defeat Sun Wukong to avenge his nephew, the Red Boy. However, Wukong, with the help from Sha Wujing, managed to outwit and defeat Immortal Ruyi.

Bull King later appeared when Xuanzang and his companions arrived at the Flame Mountain, having re-married to Princess Jade Face (a demonic fox). After being told by her that she was just being "harassed" by Sun Wukong, he angered and went out to fight Wukong. At first, the Bull King decided to spare Wukong's life, but upon hearing his former sworn brother's request of borrowing the Iron Fan, he angrily refused and the two fought, but eventually the Bull King decided to postpone the fight as he was going to go to a party held by the Wansheng Dragon King. During the party, Wukong stole his steed, disguised as him and took away the Iron Fan from his former wife Princess Iron Fan. Upon learning this, Bull King angered and swore revenge.

Like other demons, the Bull King is also escaped, along with his wife Queen Iron Fan, from Doraemon's gaming machine due to Doraemon forgot to turn it off. He and his wife set up plans to eat Xuanzang so that the demons can evolve into more humanoid beings, and succeeded in capturing Xuanzang along with Doraemon, Nobita, Shizuka, Suneo and Jaian with the help of his son Linlei, but eventually he was killed by Nobita (who he believed to be Sun Wukong) in a duel and thus all of the magic that the demons caused were disposed.

Queen Iron Fan, due to this, died shortly afterwards by falling into the lava. This incarnation of the character appears to be the supreme leader of all the demons, as the Golden and Silver Horned Kings, another two demons in the original novel, also served him and Queen Iron Fan.

In this version, his son is Linlei, who while loosely based on the Red Boy, is a totally different character. Linlei later redeemed himself and joined Xuanzang in the latter's journey to India in honor of his deceased parents and the demons. 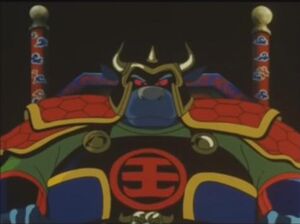 Bull King in Doraemon: The Record of Nobita's Parallel Visit to the West. 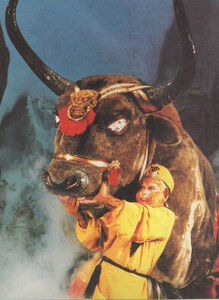 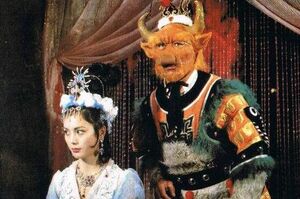 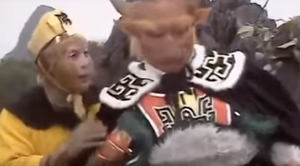 Wukong begs the Bull King to borrow the Iron Fan.

Bull King orders Doraemon and the others to be cooked so he can eat them. 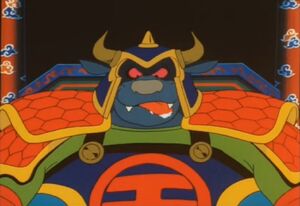 Bull King licking his lips hungrily, planning to eat Doraemon and his friends. 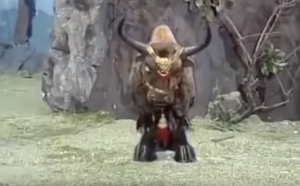 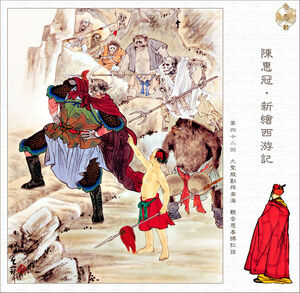 Sun Wukong disguises as Bull King, and the Red Boy in the novel, also the closest view that one can see about Bull King's novel depiction. 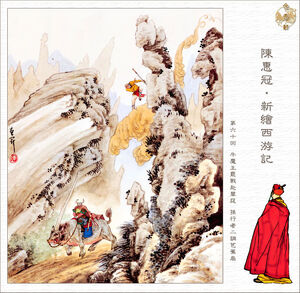 Bull King going to the Wansheng Dragon King's party, and Sun Wukong in the novel. 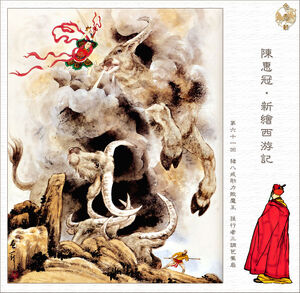 Bull King's true form vs. Nezha in the novel. 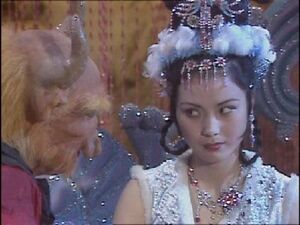 Bull King and his second wife, the Jade Face Princess. 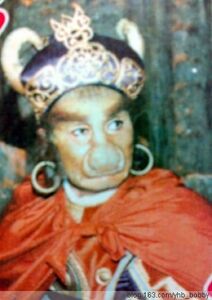 Bull King, portrayed by Yan Huaili.
Add a photo to this gallery

Retrieved from "https://villains.fandom.com/wiki/Bull_King?oldid=3546006"
Community content is available under CC-BY-SA unless otherwise noted.