Cause trouble and general thuggery.

Teenage Thugs
The Bullies are a faction of the video game Bully. They are led by Russell Northrop. After Jimmy defeats Northrop, the Bullies become his loyal friends, always respecting him. In the process, redeeming themselves.

The Bullies are ill-disciplined, - they can be found harassing students of all ages and factions, most commonly non-clique students and Nerds. The bullies are quite hostile, as they will frequently harass people and attack Nerds when in range. Jimmy was quick to learn this and the Bullies were the first enemy faction he had to face upon arriving at the school. The Bullies are also regularly truant, as they can almost always be seen outside when classes are supposed to be happening.

Bullies can be distinguished by their dress code of unkempt white shirts and jeans. They do not have a female member, a designated second-in-command, and seem to have little to no interest in the clique hierarchy of Bullworth Academy.

While the Bullies are in general a group who don't take orders save from those who are strong enough to beat them, they do have some individuals who stand out from the rest of the group, these are:

Unlike other student factions in Bullworth Academy, Bullies have only 7 members in contrast to other factions having eight members. This means that in Bullies there is no second-in-command: only one undisputed leader, and the rest is the led. 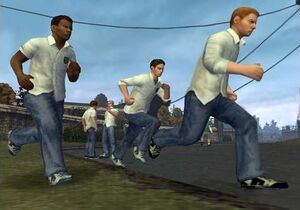 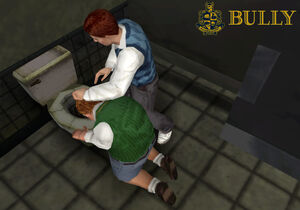 Bully giving a Student a Swirlie. 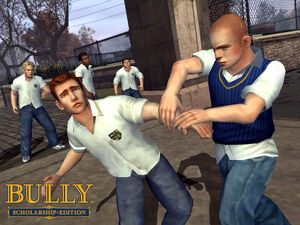 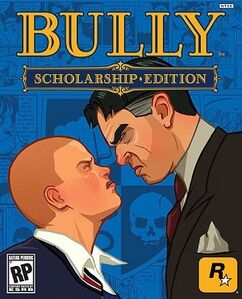 Add a photo to this gallery
Retrieved from "https://villains.fandom.com/wiki/Bullies_(Bully)?oldid=3382493"
Community content is available under CC-BY-SA unless otherwise noted.