Bullwhip (real name: Harold) was a teenager who is able to extract metal whips from his wrists and a supervillain in the animated TV series Batman Beyond. He is the main antagonist of episode "April Moon".

Bullwhip got these powers by enlisting the aid of Dr. Corso. He seemingly was not satisfied enough with the weapons. So, he and his gang kidnapped Dr. Corso's wife April and blackmailed him into making upgrades to his wrists.

However, Batman got involved and the gang overpowered him the first time.

After stalking them to their hideout, Batman and Dr. Corso found out that April wasn't kidnapped, but there willingly and was having an affair with Bullwhip. Dr. Corso became emotional, forcing Batman to hide him. Bullwhip and his thugs became aware of the Batman was around and attacked him.

After Batman disabled all his teammates, Bullwhip escaped and returned to Dr. Corso asking him to upgrade his wrists one last time and told him "don't hold back", unaware that Corso knew everything. Dr. Corso took his drill out and repeated Bullwhip's words. Bullwhip had a mask placed on him and the last thing he saw was the Doctor who proceeded to get to work.

Bullwhip's ultimate fate is unknown but Bruce implied that Dr. Corso most likely murdered him or at least maimed or lobotomized him. 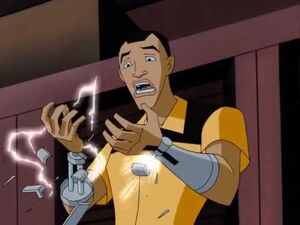 Batman Beyond vs Thugs