Bunbee is the boss of Girinma, Gamao and Arachnea. He transforms into a bee. For the first part of the series he was believed to be leading the Nightmares, but it is soon revealed that he takes orders from Kawarino. He joined Eternal in the sequel after surviving a fatal fall near the end of the last series.

In Human form he appears as a normal Japanese businessman and in fact for the first part of Yes! Pretty Cure 5 he appears to be the boss in charge. His normal attire consists of a dark gray suit, red shirt, and olive-colored tie, though in GoGo he wore a white shirt (still with the red shirt and tie underneath it) instead of his suit jacket for most of his missions. His true form is that of a musclar humanoid bee where he can throw stingers (both multiple small ones and single, large ones) from his arms and is seemingly very powerful.

In Nightmare, he is seen as very menacing and demanding, threatening his subordinates with pay cuts and termination and sending them down trap doors. However, it's also revealed that he fears being reprimanded by Kawarino. Bunbee is seeking to be promoted and move up the corporate ladder and wants to be the man in charge.

In battle, he is more comical, one time disguising his voice as a girl's to get the attention of Nozomi and Karen, chatting about his budget cuts, and expressing interest in getting into show business.

Bunbee is even more of a comic relief in GoGo! though he also shows increasing depression after his fall from grace in Nightmare and his current status as a low-ranking Eternal member. He gradually realizes that working for evil organizations like Nightmare and Eternal might not be the best thing for him, nor what he really wants to do.

Bunbee first appears in episode 2 where he is seen as Girinma's supervisor, scolding him for not obtaining the Dream Collet. After all three of his subordinates failed, he took matters into his own hands, arriving at Minazuki Karen's mansion to attack the (then) four Pretty Cures. He fails to defeat them but does seize a Pinky, though he loses it during his next attack when he transforms the Pinky into a Kowaina monster.

After this second failure (and after Karen is revealed as Cure Aqua), Kawarino appears and it is revealed that Bunbee is only a mid-level manager. After this he alternates between scolding his subordinates and being yelled at himself by Kawarino. After Girinma and Arachnea both meet their doom at the hands of Pretty Cure, Nightmare restructures, closing Bunbee's division. Kawarino moves Bunbee into the department headed up by Bloody where he loses his management position and becomes an errand boy, particularly to Hadenya.

After multiple failures at defeating Pretty Cure 5 Bunbee flees from Kawarino because of his fear of the black Kowaina mask. When he ran to the roof of the Nightmare HQ Kawarino blasts him off and he falls presumably to his death but had miraculously managed to grab the edge of a window as he fell, remembered he could fly and escaped.

In GoGo! Bunbee finds a new job at Eternal but ends up being looked down on by every member and is usually seen being an errand boy, bringing tea for them. He finds Pretty Cure for his first battle as an Eternal member by tricking Mailpo to lead him to the girls (by sending Pretty Cure a letter that contains a drawing he made of himself). When the girls recognize him, they wonder why he has returned since Nightmare was finished off. Bunbee explains to them about the events that happened at the end of the last series and how he survived.

Bunbee meets Scorp but continually mispronounces his name (Scoop-san, Spoon-san, Slipper-san, etc) but they eventually become friends (Scorp even jokingly calls Bunbee, "Bombee") and perhaps Bunbee's only friend in all of Nightmare and Eternal. The pair even teamed up and almost seized the Rose Pact before Milky Rose debuted and thwarted their plans. He was very disheartened when Scorp was killed and all the other members of Eternal didn't seem to care (Nebatakos calling Scorp trash and Anacondy completely forgetting who Scorp was). Bunbee did not get along with Nebatakos at all, as he insulted Bunbee and then forced him to massage his (multiple) legs.

Bunbee grows more dissatisfied with his position within Eternal, complaining about having to study the value of the "weird" items in the collection (and inadvertently saying some unflattering things to the Boss in the process) and asking himself how he ended up working at a place like Eternal. Things eventually came to a head when he, out of despair and desperation, approaches Pretty Cure and asks to become their leader (and is promptly denied).

Later in the series as Bunbee was reporting to Anacondy she attempts to get rid of him with hidden trap doors in the floor that sucked him in. Anacondy left when she thought he was gone but once again Bunbee had managed to grab hold of one of the doors and it swung back open. He considered getting a new job again.

In the final episodes Bunbee watched the Boss kill Murcardia and ran and hid in the collection until the Boss brought Pretty Cure 5 and Milky Rose to Eternal with Anacondy. From a window he watched Anacondy turn Pretty Cure 5 to stone and the Boss teleported them into his collection, lock all the doors, kill Anacondy and fly to the Cure Rose Garden. Bunbee then went down before Milky Rose, Syrup and Mailpo and showed them a secret entrance into the collection where they were able to return Pretty Cure 5 to normal. Although met with suspicious faces at first, Bunbee tells the Cures that he led them there, and he has no intention to fight, after all this he's going to start over a new leaf. Cure Dream thanks him and he tells her to hurry up and go to the Cure Rose Garden.

In the final episode after the Boss's defeat he is seen with his own business called Bunbee Company that is little more than a shack on the roof of a large office building with a Kawarino-lookalike employee named Shiri, who tells his new "boss" to do everything himself. Bunbee, however, works hard to improve even if faced with such obstacles. 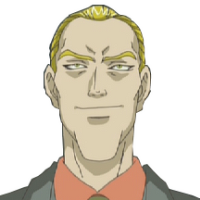 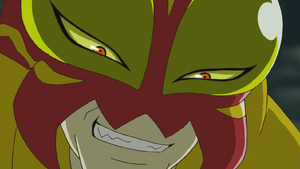 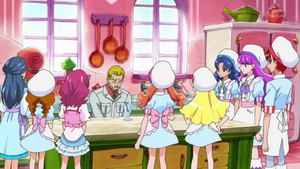 Bunbee explains himself to the Cures
Add a photo to this gallery
Retrieved from "https://villains.fandom.com/wiki/Bunbee?oldid=4136824"
Community content is available under CC-BY-SA unless otherwise noted.