Bunnicula's Bride is a character in Bunnicula. She only appeared in "Bride of Bunnicula", in which she is the main antagonist.

She was voiced by Kari Wahlgren, who also played Velma Green the Spider Queen from Billy & Mandy: Wrath of the Spider Queen, Vex from The Elder Scrolls V: Skyrim, Marianne vi Britannia, Guinevere de Britannia from Code Geass, Phosphora from Kid Icarus: Uprising, Tayuya from Naruto, Diva from Blood+, Charmcaster from Ben 10, Shannon Boxman from OK K.O.! Let's Be Heroes, Jeane from No More Heroes, and Suzy Johnson from Phineas and Ferb.

Mina builds a vegetable monster for her science project, but when a blast of static electricity brings the creature to life, Bunnicula instantly falls for her charms.

Chester have bad feelings about her, he tried to warn Bunniucla but Bunnicula's Bride tells Chester that Bunnicula is her which scared Chester.

She wants to use Bunnicula's supernatural energy to create army of Zombie Vegetables to kill Chester and Harold.

However, after Bunnicula defeated her army & saved Chester, & harold. she gets mad at him, kicks him in the crotch, said horrible things to him, & puts her two carrot ears in his mouth.

After that she runs away never to be seen again. It is unknown what happened to Bunnicula's Bride afterwards. 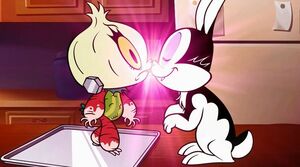 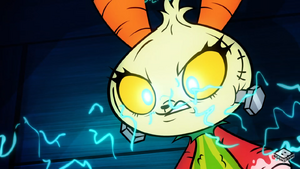 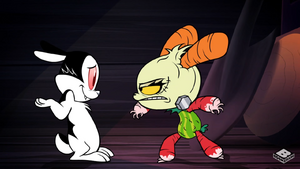 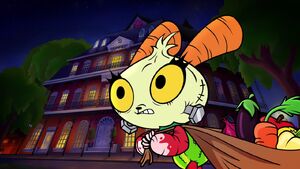 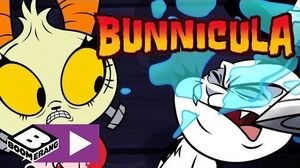