The Bunny is a character in The Grim Adventures of Billy & Mandy. He only appeared in "Wishbones," in which he is the main antagonist of Pud'n's story.

He was voiced by veteran voice actor Michael Bell (with his voice digitally altered to make him sound demonic).

The Bunny is brought into existence when Pud'n wishes for a bunny on the magical wishing skull Thromnambular. The bunny appears, and Pud'n picks it up. In a deep, demonic voice, the bunny tells Pud'n that it loves him and asks him if he regrets wishing for it. Pud'n says no, and the bunny asks him if he has ever heard of "tough love." Pud'n asks what that is and the bunny headbutts Pud'n and makes a disturbing screech and then punches him. Pud'n asks what that was for, and the Bunny says "sometimes love hurts, Pud'n, and I love you a lot." The Bunny then hits Pud'n with a large tree branch and sends him flying through the window of a restaurant. Pud'n tried to attack him, but the creature simply dodged it and kicks him into a pastry cart. The cart rolls out of another window and Pud'n lands in the Endsville Cactus Farm. Pud'n is badly hurt, but is at least happy to have gotten away from the Bunny. Just then, the Bunny appears driving a truck with the world's largest pillow on the back of it (conveniently right next to the cactus farm). The cart rolls onto a busy road, with the Bunny following close behind. Pud'n grabs a cake and throws it at the truck, but it has no effect. Pud'n grabs two chocolate eclairs and shoots the custard at the pillow, making the truck explode.

It is unknown what happened after this, but it can be assumed that the Bunny murders Pud'n. However, with Grim's intervention by wishing that Billy and Mandy had never found the skull, the Bunny never existed at all and it is very likely that Pud'n was revived and still alive due to Grim's wish.

Bunny is cruel, sadistic, and aggressive to everyone though (at first) it appears to be kind and gentle to Pud'n until it reveals its twisted intentions about its way of expressing love to him. It also seems to be unstoppable as Bunny didn't care about suffering many wounds during its mission to "love" Pud'n.

Bunny has the appearance of a normal bunny with pink and white fur, blue eyes, and a turquoise nose, though it secretly has a demonic appearance at first. Its appearance also changes at the end of the episode due to its wounds. 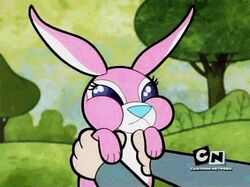 Retrieved from "https://villains.fandom.com/wiki/Bunny_(The_Grim_Adventures_of_Billy_%26_Mandy)?oldid=4144753"
Community content is available under CC-BY-SA unless otherwise noted.