Killing people and cannibalizing their bodies (often stringing them up over the bridge).

Kill anyone who enters his territory.

The Bunnyman is an urban legend that probably originated from two incidents in Fairfax County, Virginia in 1970, but has been spread throughout the Washington D.C. area. There are many variations to the legend, but most involve a man wearing a rabbit costume ("bunny suit") who attacks people with an axe.

Story variations include the origin of the Bunnyman, names, motives, weapons, victims, description of the bunny suit or lack thereof, and the possible death of the Bunnyman. In some accounts, victims' bodies are mutilated.

While Bob insisted he was wearing a white suit with long bunny ears, both remembered seeing his face clearly, but in the darkness they could not determine his race. Phillips said the man was wearing a gray, black, and white bunny suit and was about 20 years old, 5 feet 8 inches (1.73 m) tall, and weighed about 175 pounds (79 kg).

The legend has circulated for years in several forms. A version naming a suspect and specific location was posted to a web site in the late 1990s by a "Timothy C. Forbes". This version states that in 1904, an asylum prison in Clifton, Virginia was shut down by successful petition of the growing population of residents in Fairfax County. During the transfer of inmates to a new facility, the transport carrying the inmates crashed; some prisoners escaped or were found dead. A search party found all but one of them.

During this time, the area was ordered and the police located the remains of Marcus Wallster, left in a similar fashion to the rabbit carcasses hanging in a nearby tree or under a bridge overpass. Officials name the last missing inmate, Douglas J. Grifon, as their suspect and call him "the Bunnyman".

In this version, officials finally manage to locate Grifon but, he nearly escapes before being hit by an oncoming train where the original transport crashed. It is eventually revealed that Grifon was institutionalized for killing his family and children on Easter Sunday. 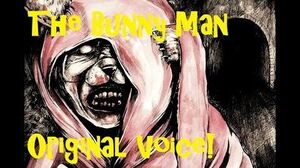 "The Bunny Man" Voice And Story