Grizzle, or better known by his Japanese name Bunto, is one of the secondary antagonists (alongside Tabaqui) in the 1989 anime show Jungle Book: Shonen Mowgli. He is a baddie and former member of Akela's pack and a follower of Shere Khan

He was voiced by Vlasta Vrana in the English version, and Norio Iwanoto in the Japanese version.

Grizzle was once a good wolf who lived with the Seeonee wolf pack, but when he broke the law, he was kicked out by Akela. As a result, he became bitter and came to the dark side when he met Shere Khan.

One day, he and his henchmen, Dusty and Jocko, raid a farm and a few farmers come out with guns to shoot them, but they manage to escape. Chil informs the jungle about Grizzle and the wolf pack decides to keep a look out for him. However, one night, Grizzle and his henchmen attack Sura when they were sleeping and one of the wolves warns Mowgli. Grizzle and his henchmen raid the hunting grounds and the pack head to council rock. Grizzle and his henchmen arrive and the pack snarl at him. Grizzle offers Akela to have him join the pack again, but he refuses. He then notices Mowgli and insults him, but Mowgli threatens him. After Akru and Sura refuse to have him join the pack, Dusty attacks Lala and Grizzle orders Akela to make up his mind to let them in the pack. Akela asks them to let Lala go so he can let them into the pack and Grizzle reluctantly lets her go. Grizzle makes a deal with Akela to let him and his cronies hunt where they like, but Akela refuses, as it breaks the laws. Grizzle becomes annoyed by this and leaves.

Later, Shere Khan comes up with a plan to wreck Mowgli's lair and Grizzle blackmails Alba and his Bandar Log to wreck it. The monkeys destroy Mowgli's lair and Kichi warns Mowgli. They head over there and find his lair in ruins. Kichi mentions that Dusty and Jocko were there during the destruction, much to Baloo's dismay. Kichi informs Bagheera and he heads over there. Mowgli taunts the Bandar Log and he leads them to the island, where Kaa, Baloo and Bagheera defeat the monkeys. Kaa subdues Alba and they interrogate him. Alba reveals that Grizzle ordered them to wreck Mowgli's lair and explains that he wants Jocko to usurp Akela. Kaa warns Alba to not follow Shere Khan's orders and they let him go. Mowgli informs Luri and they come up with a plan to stop his plans. They convince Akela to move to Luri's lair in order to be safe from being ambushed by Dusty and Jocko and he reluctantly does so.

Lala arrives at Dusty's lair and he reveals Jocko's location at the river, so she and Mowgli head over there. They arrive at the river and spot Jocko pacing around with two hyenas drinking at the river. They observe Jocko's signals to the hyenas and they leave. Mowgli heads after the hyenas, while Lala watches Jocko. However, Mowgli loses sight of them and Lala meets Jocko. Lala tells Jocko that Akela is sick and he heads off as Lala insults him. Jocko informs the others and they berate him for possibly being fooled. Bagheera, Baloo and Kaa inform Chil and he sets out to find Grizzle's location. The following night, Grizzle and his henchmen arrive at Akela's lair and sneak in to attack him. Lala warns Mowgli, but fortunately, Akela wasn't there, as he was visiting Luri's lair. Kichi warns Luri and they decide to track them. Meanwhile, Chil manages to find Grizzle's location at the Cold Lair and Bagheera spots Jocko heading over there before he informs Mowgli.

At the Cold Lair, Grizzle's henchmen confront Jocko after their failure to attack Akela until Grizzle stops them. Grizzle bows down to Jocko and explains that his henchmen expected to find Akela at his lair before telling him to not make anymore mistakes as he snarls at him. Meanwhile, Mowgli finds some sharp stones to subdue Grizzle and Luri plans to head to the Cold Lair with, Mowgli, Akru and Lala, while Sura is in charge of Akela's pack. The following night, the four of them head to the Cold Lair with Bagheera following them and the Bandar Log spot them. One of the monkeys warns Shere Khan and he tries to head to the Cold Lair to help Grizzle, but Kaa blocks his way, while Baloo stops Tabaqui. They arrive at the Cold Lair and battle Grizzle and his henchmen. Luri jumps over Grizzle and confronts his henchmen. Grizzle orders them to attack, but Mowgli, Akru and Lala surround him. However, he jumps up onto a building and Mowgli follows him. Mowgli eventually manages to hit him with his boomerang and he falls to the ground, giving Akru and Lala the opportunity to grab his hind legs. Mowgli tries to use one of his stones, but Grizzle grabs it and yanks it out of his hands. He declares that he will never give up and Mowgli uses his other stone. He charges at Grizzle and stabs him in his jugular, killing him.

Grizzle is a wolf with beige (or grey, as he appears in some scenes) fur and a dark blotch around his left eye. He has the distinction of being the only wolf in the series with any marking on his face and is also missing a large portion of his left ear. 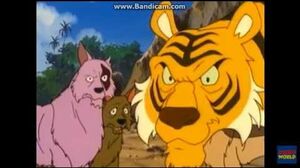 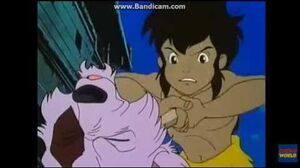 Retrieved from "https://villains.fandom.com/wiki/Bunto?oldid=3984448"
Community content is available under CC-BY-SA unless otherwise noted.