Villains Wiki
Register
Don't have an account?
Sign In
Advertisement
in: Urban Legends, Villains of Folklore, Mythology Villains,
and 23 more

Predatory Monster
Bunyips, also known as the Kianpraty, are mythological creatures from Australian folklore. The creature, according to the best-known legend, is is a bloodthirsty monster that dwells, river mouths, billabongs (one type of bogged water), and can even appear in pits.

The Bunyip can remain still underwater and wait for a prey to pass, similarly as a crocodile does. It is believed that the Bunyip has a predilection for the meat of women and children, which is very sweet. The Bunyip, surprisingly, appears both in Aboriginal traditions (in which up to nine different versions of the monster are counted, according to the writer Robert Holden) and in stories of European settlers who date even in the mid-nineteenth century.

The book Aborigines of Australia mentions the Bunyip over ten pages but concludes with the following: "Actually, little ones know the blacks of their form, shelter or habits; and they seem so terrified by the beast.". There was a rock painting known as Challicum Bunyip, engraved by aborigines in the bank of La Cañada Fiery near the population of Ararat in Victoria. According to the report of the newspaper "El Australasian" of 1851, a Bunyip was attacked with spears after killing an aborigine. The Reynell Johns antiquarian insists that until 1850s, the aborigines had a habit of traveling to the place every year and recording the Bunyip lines; which measured between "four high and 11 long steps". In 1845, the newspaper "The Geelong Advertiser" announced the discovery of fossils in Geelong province, and the history of an aborigine who seeing them, said it was the bones of a Bunyip, and the newspaper New South Wales. The initial reports suggested that it was something "completely unknown by science". The excavator that found him said that all the natives who had shown them called him a Bunyip. And by July 1847, the experts like W.S. Macleay and Professor Owen, and they identified the skull as that of a poorly developed fetus of a cow. However, for that time; The skull was already being shown at the Australian Museum of Sydney, and the hundreds of visitors who saw him mentioned that it was a "Bunyip", which unleashed a vague collective hysteria after it was also mentioned that in March of that year an immense "platybus" (platypus, "ornitorrinco") sunbathing on the edge of the Yarra River, and on the opposite side, a group of hunters rose in a boat to catch him, but the beast disappeared when they were at a yard of her.

The descriptions of the bunyips vary enormously. They are usually described as marine monsters, with some features that are common descriptors being a ponytail, fins, and walrus fangs or horns. In other legends, it appears as a crocodile or a bird, while in some specific versions, it is believed that it is a snake with a beard or mane or even a gigantic beast with human traits, long neck, and a bird head. Its size goes from that of a large dog, up to something larger than a rhinoceros or a serpentine beast of proportions greater than those of an anaconda. 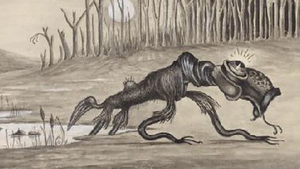 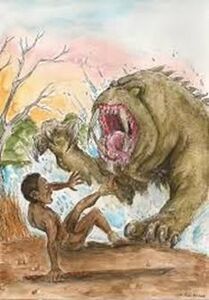 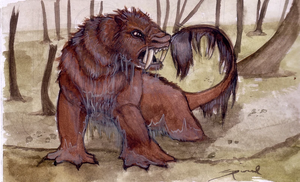 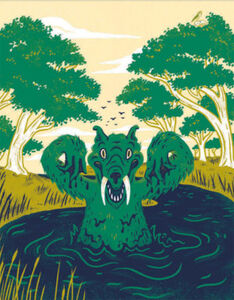 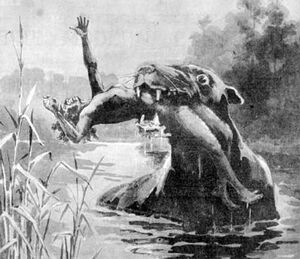 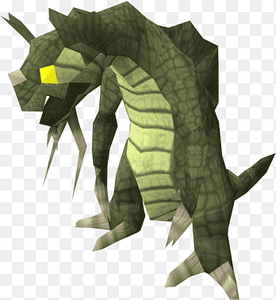 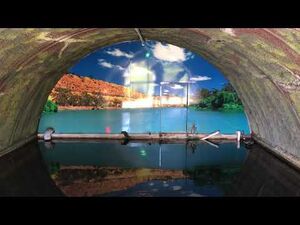