Spending time with Geki and his friends.

Get his revenge on Geki (formerly; failed).

Defend the earth from evil (succeeded).

Yamato Tribe Knight Burai (simply known as Burai) is a minor antagonist turned supporting protagonist in the early 1990s Super Sentai series, Kyōryū Sentai Zyuranger. Initially a villain for the first five episodes of his appearance (17-22), he eventually became the sixth member of the Zyurangers, and the first 'official' sixth member of any Sentai.

The Zyurangers find their mentor Barza and his friend Gnome acting very weird, along the lines of trying to kill the latter's grandson, Ryota. Geki and Mei later find out that Ryota has the key to a sixth member of the Kingdoms of Ancient Mankind. When Bandora finds out about this, she dispatches some of her minions to aid Ryota in opening the cave this person lay in. With the aid of Grifforzer, Bukkubakku and Tottopatto (despite the warnings of Barza and Gnome), Ryota releases the sixth warrior. He identifies himself as Burai, the Prince of Yamato Tribe. This is big news for the Zyurangers, especially for Geki, as he didn't have any brothers.

He used the same transformation shout as the other Zyurangers "Dino Buckler!". Burai then removes a gold-coloured device from his belt, and transforms into a powerful figure dressed in emerald green, identifying himself as "Dragon Ranger! Burai!".

While the Zyurangers discuss the mysterious character, Burai/Dragon Ranger jumps up onto Daizyujin's head and breaks down the door to the cockpit. He tells the Zyurangers to 'Go to Hell!' and begins beating the snot out of them, to the point where they fall out of Daizyujin.

In the aftermath of the Burai beating up the Zyurangers, Ryota seeks comfort from his grandfather, who gives him comfort, reluctantly accepting the damage is done; Barza, on the other hand, says that Ryota isn't to blame, because Burai coming back was destined to happen. Meanwhile, Burai/Dragon Ranger has beaten the Zyurangers so hard that they are back in their normal attire, while the former is still Dragon Ranger, and has climbed to the top of an outcrop, where he laughs evilly and escapes.

In Episode 18, Barza reveals that Burai and Geki are brothers born to the Black Knight, a warrior of the Yamato Tribe. When Burai was eight years old, Geki was born. The Black Knight never got on with the king, especially when the latter tried to take new-born Geki, to which the Black Knight responded by challenging the king to a swordfight. The king won and killed the Black Knight, who, before dying, ordered eight-year-old Burai to avenge him. Burai accepted, and his father died. Meanwhile, the king and queen adopted and raised Geki as their own son.

After the duel, Burai fled the Yamato Tribe's kingdom, to the forest, where he trained, every single day of his life, living with Gnome and Ryota. Living with them, Burai upheld the vow he made to his father, but he made his own vow; be a hero, against the monsters destroying the Earth. However, when Bandora was defeated and she and her minions had been imprisoned on the Planet Nemesis, the Yamato King and Queen, along with their unnamed 10-year-old princess (who Geki believed was his sister), had been murdered by Bandora, so Burai couldn't avenge his father, so he set his eyes on getting rid of Geki. In the aftermath of the war, the five tribes (Yamato, Sharma, Etof, Daim and Risha) had each selected a warrior (Prince Geki (Tyranno Ranger), Knight Goushi (Mammoth Ranger), Knight Dan (Tricera Ranger), Knight Boi (Tiger Ranger) and Princess Mei (Ptera Ranger)) and placed them in stasis pods in a sacred temple, to be awakened when Bandora returned. Somehow, Burai heard about this, and placed himself in a separate stasis pod in the mountains, in order to avenge his father (by killing Geki).

At some point, there was an avalanche in the mountains where Burai was buried, and he was crushed to death. A demigod, Clotho, gave Burai a magical drug which would prolong his life for a certain time, yet he would eventually die upon reawakening (N.B. The avalanche was only revealed when the Zyurangers had to face DoraFranken/ZombieFranken/SatanFranken, by which point Burai had joined his brother as a hero).

Towards the end of Episode 19, Bandora prophesized that Daizyujin would die soon. In Episode 20, an eclipse was scheduled to happen, which would limit the sunlight powering Daizyujin. To draw the Guardian Beasts out, Bandora sends her thugs out to capture a bus full of people. When the Zyurangers summon their Guardian Beasts and they form Daizyujin, Bandora uses gigantic-proportion Grifforzer, Lamie and Burai, who destroy Daizyujin, casting the Guardian Beasts into the molten mantle of the Earth.

Confinement to the Lapseless Room

Bandora and her minions party, celebrating the destruction of Daizyujin. Bandora rewards Burai with the Sword of Hellfriede, which belonged to a dangerous (though now deceased) warrior back from their day. Little did Bandora mention, Hellfriede would drive the wielder mental; during the party, Burai got thrown out of Bandora's palace, for attacking Bandora.

On Earth, Burai was captured by a mysterious little girl robed in white, from head to toe, and was thrown into a chamber identified as the Lapseless Room. Here, the figure, identifying itself as Clotho, the Spirit of Life, told Burai that this was his new home; here, he would not age, because he only had 30 hours left to life in the real world. This time was represented as a green candle, which would melt away as his time in the real world elapsed. Clotho also presented Burai with a gift; the Zyusouken (translates as 'Beast Play Sword'). She told him that he could leave the Lapseless Room by wishing on the Zyusouken, but he had to bear in mind his lifespan.

Burai teleported out of the Lapseless Room, to the top of a skyscraper near Tokyo Harbour. He played one note of it first, not believing that a weapon could do such a thing. He played it again, and something magical happened; a great big beast climbed out of the sea, onto the harbour. This was Guardian Beast Dragon Caesar, Burai's personal Guardian Beast, despite his lifespan. He played the Zyusouken some more, and Dragon Caesar stepped on a few oil drums at the harbour.

Fight against Geki and redemption

The Guardian Beasts returned from the mantle, to the surprise of the Zyurangers. The mantle was revealed to have been strong in Gaiatron, the energy which Daizyujin depends on. Then, Geki and his Guardian Beast Tyrannosaurus left the temple to fight Burai and his Guardian Beast Dragon Caesar. The warriors and the Guardian Beasts fought, and Burai and Dragon Caesar lost both their duels. As Tyrannosaurus prepared to kill Dragon Caesar, the gods told Geki that he must kill Burai, but Geki couldn't bring himself to do it. Burai saw this as his opportunity to kill Geki, but his brother's words made him change his mind. Both brothers started crying, and Burai's tears reduced Hellfriede to ashes, purifying him of his hatred. Daizyujin then decreed that the evil in Burai had gone, and there would be six Zyurangers from then on, as Geki and Burai hugged and decided to make amends, with Burai saying that he wanted somebody to blame for his father's death.

All six then transformed into the now 6-strong Zyurangers, and Daizyujin said something magical would happen if Burai played his Zyusouken and merged Guardian Beasts Dragon Caesar, Zyumammoth, Triceratops and Sabre Tiger. Burai played, and a new mecha combination appeard before them: Gouryujin (translates as 'Mighty Dragon God'), armed with his Dragon Antler. Geki, Goushi, Dan, Boi and Mei were happy with what they saw, but Burai had disappeared, back to his Lapseless Room. 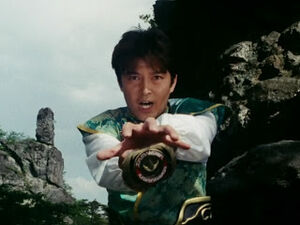 Burai, with his Dragon Buckler in his hands. 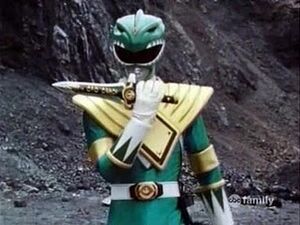 Burai, as Dragon Ranger, with his Zyusouken. 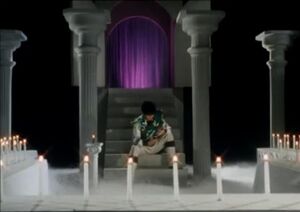 Burai, in the Lapseless Room. 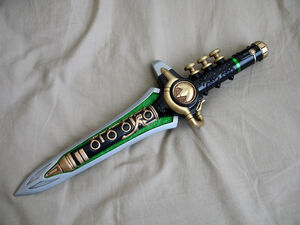 The Zyusouken. It was known as the Dragon Dagger in MMPR. 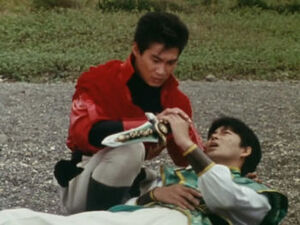 Burai before dies in his brother Geki's arms. 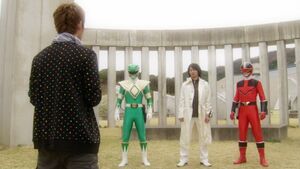 DragonRanger's spirit, together with Mikoto Nakadai (AbareKiller) and TimeFire appearing before Gai Ikari.
Add a photo to this gallery

Retrieved from "https://villains.fandom.com/wiki/Burai?oldid=3534313"
Community content is available under CC-BY-SA unless otherwise noted.