Ruler of his army of monsters

Conquer the world.
Kill Ethan and Sarah (all failed).

Buraki is the main antagonist of the 2007 Korean-American film Dragon Wars (also known as D-War). He is a Dark Imoogi who sought to become the new Celestial Dragon, so he can destroy both Earth and Heaven and rebuild them in his own images. He is the leader of the Atrox Army, an army formed by twisted beasts which some of them resemble either Western Dragons, Theropod Dinosaurs, and Frog-like creatures.

His vocal sound effects were provided by Steve Schatz.

The legend says that every five hundred years, in return of benefits and kindness that an Imoogi (a giant serpent-like dragon) provided to humanity, the said Imoogi would be bestowed a Yeouiju, a source of untold power that would transform it into a Celestial Dragon. Many of these serpentine beings and their respective followers were able to achieve that goal, but all changed five hundred years ago: Buraki, who was arguably the most destructive and malevolent of all Imoogis, had sinister intentions where he and his followers sought to steal a Yeouiju so once he ascended into a Celestial Dragon, he would destroy both Heaven and Earth before rebuilding them with his twisted images.

As a result, Heaven had a newly formed Yeouiju hidden within a young girl's body. But the malevolent Imoogi knew where to find the girl, revealed to be Narin, daughter of her home village's chief. Upon her twentieth birthday, he had his followers, the Atrox Army, put the girl's home village off the map by force to find her. When his army loses Narin due to Bochun, Buraki goes to after her by himself, but failed to capture her, as she and one of the Yeouiju's guardians, Haram, committed lovers' suicide by jumping from a cliff into the ocean.

The loss of the Yeouiju perhaps meant to be punishment for Buraki which also resulted in the unnamed Good Imoogi losing his chance to become a new Celestial Dragon. But Buraki remained defiant and swore to return after five hundred years passed where he would fulfill his goals.

Buraki did return in 2007, where he destroyed a part of Los Angeles before leaving. One of the security guards of a local zoo spotted him feeding on animals of the zoo, but is dismissed as a lunatic due to Buraki erasing his trace. Although, FBI agents find a piece of his scales behind.

Buraki was seen again attacking the hospital just as Ethan (Haram's reincarnated self) found Sarah, Narin's reincarnated self who carried developing Yeouiju within her. Because of their advantage over modern day's technology they outran him with Ethan's car, Buraki decided to bring his army to Earth once again, though still personally chasing her to minimize the odds to reclaim the Yeouiju.

Buraki was seen again attacking the house of Ethan's psychiatrist friend who had Sarah see her past self's life, unwittingly releasing a surge of the nearly completed Yeouiju inside her. Another chase ensues, and Buraki finally cornered Ethan and Sarah, only to be distracted by police forces who intercepted him. However, this did not stop him as he resumed the chase. As he did, the evil Imoogi took his time by ramming through the streets full of cars and innocent people as he made his way to the US Bank Tower where Ethan and Sarah had a helicopter to take them away. Just as the chopper takes off, Buraki slithers his way onto the top of the skyscraper and bites it at the last second and tossed it to the street below, though Sarah and Ethan jumped back onto the building before the chopper smashes at the base of the tower.

The agitated Sarah threatened to commit suicide in front of Buraki, but Ethan stopped her as the evil Imoogi could not be faltered. Both watch as the Dark Imoogi conjures darkness around the city as he prepared to claim the still-developing Yeouiju inside Sarah. However, a squadron of military choppers interfered with his magic by gunning him. Enraged, Buraki crashed one of the attacking choppers, only for the others to fire missiles at him. Though their weapons are visibly useless against Buraki's near-invincible scales, he was visibly injured by the fall from the tower, and had his Atrox forces attack the whole city both to neutralized human forces and search for the escaping Sarah as he rushed to recover in his fortress.

The Atrox Army eventually succeed in capturing Ethan and Sarah and took them to Buraki's fortress where Buraki could devour Sarah and take the Yeouiji inside her by force to become a Celestial Dragon. There, the medallion given to Ethan by Jack that belonged to Haram used its power, rending Buraki unconscious, demolishing most of the fortress, and destroying the entire Atrox Army in the process (the General survives the blast due to his magic, but is disintegrated when he slashes the medallion). Buraki recovers and attacks the two, but the Good Imoogi awakened in time to fight against Buraki, where the two engage in a duel that Buraki wins by gaining the upper hand and seemingly kills the Good Imoogi by snapping his neck.

Buraki is ruthless, despised, violent and malevolent. He seeks the power to destroy the world and Heaven and form a new one. His personality is demonic, as well as seeking power at any cost. He won't stop his goal to obtain the Yeouiju from Sarah, even if he has to kill anyone or even one of his followers.

Aside from his powerful jaws, he has almost indestructible skin, colossal strength, great velocity, and can magically detect the girl possessing the Celestial Power no matter how far away. He also mastered dark magic, which only hinted how he can conjure dark clouds around the US Bank Tower and possibly, some of his minions' deformations.

Buraki roars in anger after Ethan and Sarah outrun him.

Buraki chases after Ethan and Sarah through Los Angeles. 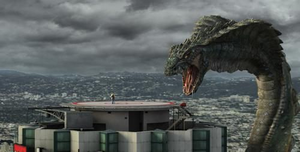 Buraki confronting Ethan and Sarah on top of the US Bank Tower.

Buraki's death as he disintegrates into ashes after the Celestial Dragon shot a fireball down his throat.
Add a photo to this gallery 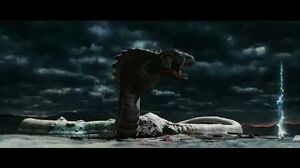 Retrieved from "https://villains.fandom.com/wiki/Buraki?oldid=4314097"
Community content is available under CC-BY-SA unless otherwise noted.