Major Buran Blutarch is an EFF officer on loan to the Titans and a supporting antagonist in several episodes of Mobile Suit Zeta Gundam.

He is voiced by the late Hidetoshi Nakamura.

Buran was a test pilot hailing from the Earth Federation's Oakland Newtype Lab. After AEUG and Karaba fleed from Jaburo due to the reveal of serval nukes being hidden in the base they escaped with some stolen Garuda-class transport planes. Buran was sent to intercept them with his mobile suit Asshimar with his squad to prevent them from returning to space, during which, he sucessfully took out Roberto who died protecting the AEUG's HLV shuttle. He later tried to shoot down Quattro's shuttle as well, but was forced to retreat when his Asshimar was damaged by Kamile.

Later, he continue to purist the force of Karaba and met up with the Cyber Newtype Rosamia Badam, dueing their attempt at sinking Karaba's Garauda-clasa, the Federation ace Amuro kamikazed his transport plane into the Asshimar while escaping, thus forcing Buran to retreat.

He would continue to pursit the Karaba and AEUG on Earth and attacked them again with Rosamia despite being told to allow them to cross the Pacific Ocean, this time, after Kamile damaged the Asshimar's engine, Buran attempt to take Kamile with him, but Amuro stepped in and stabbed the Asshimar with a beam saber, destroying it and killing Buran, 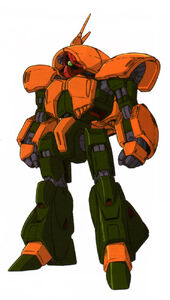