Burgermeister Meisterburger (German for mayor; master citizen) is the main antagonist of the 1970 Christmas TV special Santa Claus is Comin' to Town. He is the sadistic, oppressive and abusive mayor of Sombertown who despises toys and will arrest anyone who plays with or owns a toy.

However, unknown to Kris, Meisterburger has written a law that forbids anyone from owning toys under the threat of imprisonment after he accidentally slips on a toy duck. This forces the upset children to spend their fun time doing extra chores. When Kris Kringle finally arrives to Sombertown, he is avoided by many of the citizens and chastised by a local teacher Jessica, who tells him about Meisterburger's law. However, Kris finds the law to be quite silly and gives Jessica a china doll that her parents did not get her when she was young, thereby proving his point to her. Winning Jessica and a lonely penguin named Topper to his side, Kris starts giving the toys to cheer up the children, which causes an angry Meisterburger to declare Kris a wanted criminal.

Although Meisterburger orders Grimsby and his men to arrest Kris, the latter was able to safely escape due to his experiences in the woods. As the months go by, Kris and the Kringle family are able to provide better ways to deliver toys (with the help from several animals and the Winter Warlock) without attracting the authorities, such as going down chimneys after Meisterburger orders all doors and windows to be locked at night and putting the toys in stockings near the fireplace after Meisterburger orders every house to be searched before dawn for any toys. Fed up with all his failures to capture him and prevent him delivering toys, Meisterburger personally sets up a trap for Kris by capturing Topper and holding him hostage to force Kris to surrender. He also gets Grimsby and his men to arrest the Kringle family and the Winter Warlock, and has their workshop and toys burned down, much to the children's distraught.

Satisfied and triumphant that he has finally destroyed all of the toys and put the entire Kringle family and the Winter Warlock in prison, Meisterburger contemptuously mocks Jessica when she pleads with him to release them, as he stubbornly refuses to believe that his anti-toy law is so silly to begin with. Finally seeing what a complete megalomaniac Meisterburger really is, Jessica manages to free the Kringle family and the Warlock by giving several reindeer the ability to fly (thanks to some magic corn that the Warlock gave to Jessica). With that in mind, the reindeer help Kris, Topper, the Kringle family, and the Warlock escape into the woods, much to Meisterburger's strong anger.

Declaring the Kringle family and the Warlock as wanted outlaws, Meisterburger swears that he and his family will hunt them down throughout the land to have them recaptured. However, the Kringle family and the Warlock move to the North Pole to evade capture, during which Kris grows a beard and uses his original surname "Claus" to avoid any unwanted attention. He even builds a new workshop at the North Pole and marries Jessica (who is now known as Mrs. Claus).

As the years go by, Santa Claus and his friends perpetually continue making toys and delivering them to Sombertown, and the Meisterburgers eventually died out and lose their power. The townspeople finally realize how silly his laws were and praise Santa as a legend. For all of his demands and huffing and puffing, the Burgermeister merely becomes the sand in the oyster's shell, the obstreperous irritant that produced a legend loved by children everywhere, while he becomes nothing more than a distant memory.

Burgermeister Meisterburger is portrayed as the defamatory, opprobrious, argumentative, fun-loathing and vituperative mayor of Sombertown, who takes pride in making the citizens sad and miserable. He is very nasty, obnoxious, contemptuous, and disdainful, and he hates toys (although he did enjoy the yo-yo Kris gave him for a short time before being told by Grimsby that he is breaking his own rule) and, after he trips on a toy duck while walking out of City Hall, he passes a law declaring toys "illegal, immoral, unlawful, and anyone found with a toy in his possession will be placed under arrest and thrown in the dungeon. No kidding!". This makes the children of Sombertown even more miserable than ever and they are forced to do chores instead of playing. He is also shown to be very censorious and sarcastic towards others. 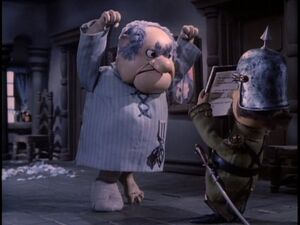