Villains Wiki
Register
Don't have an account?
Sign In
Advertisement
in: Article stubs, Mature, The Walking Dead Villains,
and 24 more

Leader of the Russian Group

Buricko is the secondary antagonist of the second half of the season two of Telltale's The Walking Dead. He is the leader of the group with three Russians, including Arvo, Natasha and Vitali.

Nothing is known about Buricko's life before or as the outbreak began except that he is of Russian origin, served a sentence in a Russian prison and is a member of a group of Russians.

Whilst Arvo is distracting Clementine's group, Buricko comes along with Natasha and Vitali and holds Clementine's group at gunpoint. He speaks in Russian towards Arvo, seemingly about the situation, and is partially surprised when they discover the group has a baby. When either Clementine or Kenny shoots a reanimated Rebecca, Buricko reacts, and opens fire on the group. But during the firefight, he is shot in the head by Kenny.

Buricko seems to be arrogant, ruthless and somewhat short-tempered in episode four as he belittles Arvo when Clementine steals Arvo's supplies (determined). 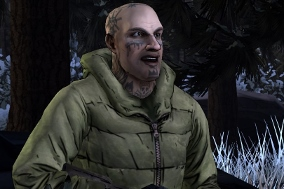