Kill all of Creech's family and continue drilling for oil.

Burke is the secondary antagonist of the 2017 Nickelodeon film Monster Trucks. He is a ruthless, cruel and cunning worker of Terravex Energy.

He was portrayed by Holt McCallany.

Burke was seen in the beginning on the day after the drilling incident at Terravex Energy. His crew were working to capture two subterranean creatures and put them into boxes which will be taken to the headquarters. He looked at one of the wrecked Terravex trucks while wielding his shock rod. Seeing that there's nothing unusual in the truck, he leaves and goes to talk with the president of Terravex Energy, Reece Tenneson. Tenneson was concerned that the Department Of Fish And Wildlife will shut down the company if the incident is exposed. Burke sends a search party to look for the other creatures if there's more of them.

At night, he heads over to the Sheriff's office to ask if any other Deputies got a call about a strange creature or something else. The officers said they didn't but one claims he knows where the location of the creature is. Sheriff Rick comes in and tells Burke there's not much to tell but one Deputy reveals that one creature whose named Creech by Tripp is found in Weathers' Junkyard where Tripp works. Burke and his crew arrive at the junkyard to see Tripp attempting get in the repair shed. He explains to Tripp that he had an incident and the officers didn't believe him. At first, Tripp doesn't let the mercenaries take a look but he let them investigate anyway. While Burke searches the junkyard, Tripp and Meredith try to make their escape with Creech in a 1955 Dodge C-3 truck. Burke sees the old truck leaving and he orders his men to follow the truck. Tripp, Meredith, and Creech hide in the lush vegetation to avoid being seen. The Terravex trucks drive by seeing that there's no sign of the trio or the truck.

The next day, Burke and his team arrive at the Terravex camp where Tripp's dad Wade is staying. Wade tells Tripp the mercenaries want the Dodge C-3 back but Tripp refuses because he built the truck. One of the crew men grabs Tripp which made Creech very angry. Tripp gets free and tells Meredith to get back in the truck. Burke approaches Tripp with his shock rod claiming he will hurt him if he doesn't give up Creech and the truck. Then, Creech spins the C-3 into a doughnut kicking up a lot of dust which buys Tripp enough time to get in the truck. After the doughnut stops, Tripp charges for Wade's trailer causing Burke and his crew to hit the dirt before the truck bursts through the trailer and leaves the camp. Burke and his crew get in their Terravex trucks and chase the heroes through town. Tripp tries some features to outrun the mercenaries and stunned Burke which he never seen the creature do anything like that. The team chase Tripp and Meredith all the way to a train crossing where Tripp lifts the truck up over one of the train cars. Tripp, Meredith, and Creech cheer in victory as Burke looks on in frustration that the heroes escaped. After the truck leaves, Sheriff Rick comes out of his police car and argues with Burke on why he and his crew chase Tripp through town. Burke claims the company he works for which is Terravex Energy employs everyone in the county which includes him.

Tripp, Meredith, and Creech take refuge at a camp to rest and hide from the mercenaries. The next day, Tripp and Meredith awake to find that Creech and the Dodge C-3 are missing. It latter shows that Creech followed the Terravex tractor trailer which was taking his mother to the Terravex headquarters. Tripp and Meredith arrive at Terravex headquarters and sneak in to find Creech, Instead, they find two more similar creatures in boxes which happened to be Creech's parents. The two then see Creech breaking in trying to save his mom and dad but Burke and his team interfere and tranquilize him. Tripp and Meredith are taken to Tenneson's office where they discuss about the operation. Burke leads the two out and Dr. Jim Dowd comes in states that he will be the one to escort the teens out. Dowd later explains he wants to be on sides with Tripp and Meredith because he's had enough of doing bad things for Terravex and wants to save the creatures including Creech. Tripp and Meredith agree with Jim and they go to find two more trucks.

Getting Ready For The Big One

The two teens arrive at Weathers' Junkyard and Tripp tells his boss Mr. Weathers he needs two acquire more trucks to get ready for his epic adventure. Mr. Weathers agrees to help Tripp and said there's one truck that's on the repo list. The truck is a green 2013 Ram 1500 with custom decals, off road mods, fender flares, and two exhaust stacks on the bed. The truck belong to a rich teenager who failed to make payments. The rich teen was in his house playing video games with his girlfriend that evening. The girl looks out to see Tripp hooking up her boyfriend's truck. Instead of trying to stop him, the girlfriend waves hello to him while her boyfriend was too busy focusing on his game. The three soon leave and head over to dealership where Tripp's friend, Sam Geldon is closing up the dealership which is owned by his father. Sam tells Tripp and Meredith there's one truck they can use. The truck is a brand new red 2016 Ram 1500 Rebel; which was going to be Sam's 16th birthday present. Tripp believes there's no harm getting an early peek and starts getting work on customizing the Rams including the Dodge C-3 which was saved at Weathers' Junkyard. Meanwhile, Dr. Jim feeds the two creatures and tells them to get ready for a little road trip. The teenagers work all night customizing the trucks and by morning, the Rams were ready.

At Terravex Headquarters, Dowd steals the big rig containing the two creatures and takes them to the car dealership where Tripp is waiting. They unload the trailer and release Creech and his parents. Creech is reunited with Tripp including his mother and father who missed him very much. The three creatures get in the custom trucks as well as Tripp, Meredith, and Dowd and prepare to take Creech home. Burke arrives at the dealership to discover only Sam is there and there's no sign of the creatures or the trucks. Burke kicks a chair in frustration and leaves knowing the creatures and the humans are on the move.

The three trucks drive through open farmland where Burke and his team chase them through the woods and into the mountains. One guy tries to push Tripp into the mountain wall but jumps out of the way and the Terravex truck hits a boulder causing it to flip upside down. Burke gets in and attempts to push Tripp over the ledge. As Burke tries to push Tripp again after he spilled out of the truck, Sheriff Rick comes in and use his police Jeep Cherokee to bash into Burke cutting him off. Tripp manages to get back in the truck with Creech's help. With the police car damaged, Rick tries to get it moving again, but Burke pushes him off the ledge sending Rick downwards. Tripp spots the tanker up ahead and Dowd informs that Tenneson is going to poison the nest.

The trucks goes faster catching up to the tanker but Burke orders his men to light the path on fire to keep the trucks from reaching the tanker and all three are stopped in their tracks. Just then, a massive white Leibherr T 282 C Dump Truck comes into view with Rick at the controls. Tripp orders Meredith and Dowd get to the sides as the massive truck plows through the blockade. Burke gets pushed and floors his truck in reverse to avoid going in the fire. He makes through the fire and drives away. The Liebherr dump truck soon gets stuck as the alley narrowed down. Tripp tells Rick to dump the large dumping box as ramp which Rick agrees. Tripp then apologizes to Rick for the terrible things he said about him which Rick gets confused and the three trucks leap over and go on the rough mountain terrain performing awesome stunts and landing back on flat ground. The trucks caught up with the tanker and Tripp tells Meredith and Dowd to take care of the pumps while he and Creech deal with the tanker. Using a dirt ramp, Tripp leaps over the tanker while Creech uses his arms to make the tanker flip upside down destroying it. Meredith and Dowd discover another tanker and it's already starting to pump poison into the nest.

After victoriously destroying the tanker, Tripp tells Creech he's almost home which makes him happy. Then, Burke appears and bashes into Tripp flipping him upside down. Burke radios to any trucks running to get to the nest. Meredith and Dowd reach the pump and Dowd explains if the pressure goes to 15,000 psi, the poison will reach to the nest. Burke hits Tripp again and prepares to charge again. Tripp tires to get Creech wake up as Burke charges full power at them. Tripp manages to grab a lever releasing gasoline and Creech immediately drinks and gets full power again.

Creech gets the truck back on all fours and the charges for Burke charging at them. The two trucks crash head on and start a pushing match with tires spinning fast, grunting with effort as Burke pushes Tripp and Creech into the hole. Creech doesn't let it happen and pushes back to staying on solid ground. Meredith and Dowd work to stop the poison follow as the mother and father creatures make their way to the entrance of the nest. Burke, Tripp, and Creech continue with the pushing as Creech breaks into the cab of Burke's Ram and furiously tries to bite him. Burke punches Creech in the face which makes him even more angry, Burke uses the advantage to try once again to push Tripp into the hole as his tires spin rapidly trying overpower the Dodge C-3. As Dowd works to try stop the poison Meredith looks on as gets worried as Tripp gets closer to the hole.

With no other option left, Tripp tells Creech to get out and save himself which he refused to do. Instead, Creech gets his arms out, grabs hold of Burke's truck, and with one last big push, Creech lurches and launches the Black Dodge Ram Dually into the air over the hole. Dowd looks on as Burke's truck flies into the air before it comes down on the poison pump machinery, destroying the pump itself and making a big poisonous leak. The truck fills with poison as Burke tries to bail out, but the door is blocked by a piece of machinery. He soon died from the poison while the psi pressure stops.

Burke arrives at Weather's Junkyard along with his crew.

Burke and his crew heading to the farm lands where the heroes are most likely to be found.

And he makes it through.

"Any trucks still running, get over to the vents quickly."

You can't beat the power of RAM! NEVER! 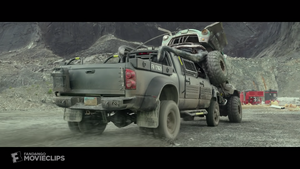 GO! Get Out! Save yourself! 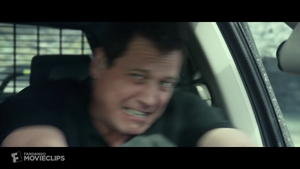 NO! NO! THIS CAN'T BE HAPPENING! 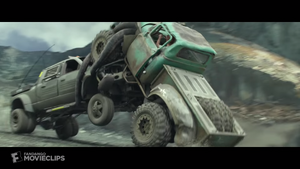 You want the poison so badly?! YOU CAN HAVE IT! 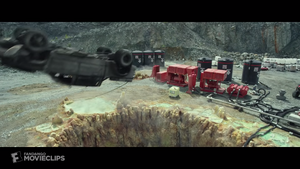 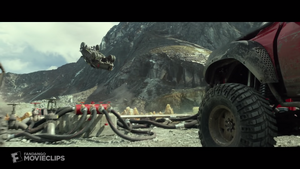 Burke's last moments before crashing down. 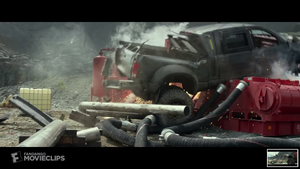 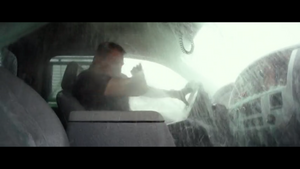 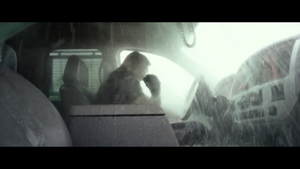 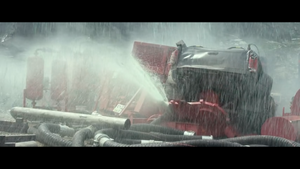 Burke's demise.
Add a photo to this gallery

Retrieved from "https://villains.fandom.com/wiki/Burke_(Monster_Trucks)?oldid=4210963"
Community content is available under CC-BY-SA unless otherwise noted.