Raze and plunder. (both universe)

The Burning Blade Clan is a demonic cult and villains in World of Warcraft. They are servants of the Burning Legion, seeking to summon demons in order to tear down Durator and its surrounding lands.

The Burning Blade Clan is a tightly run organization, with a fear of spies coloring their strict hierarchy. Leaders call themselves the First, likely harkening back to the First War when they pushed the Horde to demon-tainted victory over the Alliance. The Firsts have direct contact with the demons still reside on Kalimdor, and work to summon more of their unholy allies from the Twisting Nether. Since some goblins have joined the Burning Blade's ranks, it is likely there are spies among the Alliance as well. Their subordinate castes are split into three other groups, called the Second, the Third, and Nothing. This refers to the Second War, which ended in defeat, and the Third War, in which the Horde did what the Burning Blade considers unthinkable — joined with the Alliance to defeat the demons. Nothing refers to the current state of truce with the Alliance, defeated demons, and a splintered Burning Blade.

The Seconds report directly to the Firsts, and know most of the secrets of the cult. Many powerful warlocks hold this rank, likely aspiring that their mentors perish one day so that they can take the reins. The Thirds, comprise most of the Burning Blade, ambitious and foul orcs who want power and will risk anything to get it. Nothings are the initiates, sent on mundane tasks such as hunting, cleaning, cooking, and even serving as bait to snare those who trespass on the Burning Blade's territory.

The Burning Blade clan's ancestral home was Hallvalor, situated in the far east of Nagrand. Masters of melee combat, their famous blademasters trained endlessly to hone their skills and techniques, and many trained simply to gain the title of blademaster. However they just as equally wielded the powers of flame, through a combination of fire infusions and flammable grease, the swords and axes of most blademasters were usually covered with burning flames. The most adept blademasters could channel the power of fire into their every attack, making them even deadlier. Violent as they were however, a clan bound by honor and even enemies were treated with respect if they had conducted themselves with honor.

Though little is mentioned of the Burning Blade during the birth of the Orcish Horde, it can be presumed that they were led by Dharl of the Thrice-Bloodied Blade at the time and that he pledged his clan's loyalty to Blackhand (and through him Gul'dan). As a clan chieftain, he would likely have imbibed the Blood of Mannoroth, thereby bringing his entire clan under the dominion of the Burning Legion. As shamanism was abandoned by the Orcish Horde, the Burning Blade likely began to have their warlocks infuse their blades with fel fire instead of elemental fire.

Second War: Tides of Darkness and Beyond the Dark Portal

The Burning Blade succumbed to the demonic fury of the blood curse even more than most other orcs, as by the time they were deployed on Azeroth they were no longer considered a clan as much as an elemental force of nature. Chaotic and unpredictable, the Burning Blade Clan was little more than a marauders of demented orcs whose only objective was to raze and plunder with no regard for their own safety. Still this leaderless swarm was held in check by the ogres - to be unleashed by the clans in times of urgent duress. The Burning Blade helds loyalty to no one and would attack any that they perceived to be a threat - even to their fellow orcs.

The clan participated in the battle for Blackrock Spire, and during the final battle at the Dark Portal was routed and ultimately destroyed by troops under the command of Uther the Lightbringer.

Third War: Reign of Chaos and The Frozen Throne

Many years later, the scattered remnants of the old Orcish Horde were freed by Thrall and a reformed Orgrim Doomhammer, the latter of whom died in battle during this campaign. Thrall, the Warchief of what would soon become the New Horde continued his predecessor's work in freeing and reuniting the scattered orcs. Among those who joined his banner were the blademasters. Once part of the ill-fated Burning Blade clan that consumed itself in the throes of demonic corruption, these proud remnants of the once mighty clan swore a grim oath to free themselves and their brethren from demonic control once and for all.

Even so, other remnants of the Burning Blade remained wholly devoted to the Burning Legion. This group of orcs became known as the Burning Blade cult. Some time after the Third War one of their number, Zmodlor began recruiting both humans and orcs who were prejudiced against one another into this new incarnation of the Burning Blade. Each side had the promise to destroy their enemies. No one who followed him was aware that he also recruited their enemies. The goal was to purposely create internecine tensions between rival factions in order to collect souls during the battles. But Zmoldor's plan was put in check and the bloodbath was avoided.

The Horde and Alliance have united the centaur clan in order to fight the Burning Blade clan. It was successful. In Desolace, Led by Kohor, the Burning Blade attempted to summon a powerful demon in order to assure their victory. However, the demon was summoned too soon and it was destroyed. In Dreadmist Peak, the cult had acquired an artifact called The Demon Seed, protected by Xelnaz. The Clan was planning to use this potentially powerful artifact to launch a full scale attack on the Horde. Fortunately, the artifact was taken and given to Balgor Whipshank before it can be properly utilized.

With the Burning Blade Clan largely fell and collapsed, the blademasters swore to free themselves and continuing to free their people from demonic control. With the help of a warrior Grommash Hellscream, this goal has been mostly achieved.

Some time after averting the Hour of Twilight, Garrosh Hellscream secretly ordered Ragefire Chasm be purged of any remaining Burning Blade cultists. In their place he invited remnants of The Twilight's Hammer to begin teaching 'dark shamanism' to his loyalists. When adventurers of the Alliance and New Horde later assaulted Orgrimmar, they found that Garrosh's 'True Horde' left the signs of the bloody purge, including execution of Neeru Fireblade. A number of blademasters, however, joined the True Horde and perished during the siege.

The only Burning Blade Clan members now left of the Burning Blade are the members in the ranks of the Horde. Has the clan been truly wiped out? No one knows... 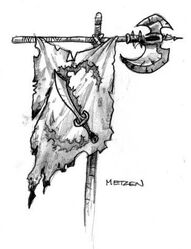 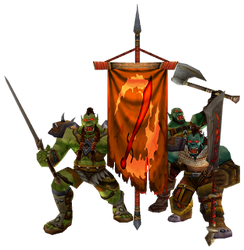