Burt the Bashful is the boss of level 1-4, Burt the Bashful's Fort. At the end of the level, Yellow Yoshi first encounters him as just a normal Burt, which Kamek sizes up with his magic, turning the Burt into Burt the Bashful. Burt has no attacks except for jumping around the room and damaging Yellow Yoshi if he comes into contact with him. Yellow Yoshi must hit him with an egg six times to defeat him, which are provided by the Egg Plant in the center of the room. After each hit, Burt the Bashful's pants will fall off more and more until they fall off completely on the sixth hit, causing Burt to turn red in shame, fly around like a deflated balloon and eventually implode or vanish.

Although Burt the Bashful doesn't appear as a boss in the game, he makes a cameo appearance at the beginning of the intro along with all the other bosses from the first game. Also, the first mid-bosses of the game, the Burt Brothers, are similar to Burt the Bashful.

Burt the Bashful appears again in this game as the boss of level 1-8, Burt the Bashful's Castle. This time around, the fight against him has three phases. The first one merely involves him jumping around much like in the first Yoshi's Island, but he will also sometimes summon Shy Guys to help him. In order to damage him, Yoshi has to first stun him by hitting him with a yarn ball, and then use his tongue to unravel his pants at the string. After Yoshi does this once, Burt will advance into his second phase, in which he will bring out two ball look-a-likes of himself, which will bounce around and can hurt Yoshi. His third phase is similar to the second one, expect he will now get a third and fourth ball and summon three Shy Guys. Once Burt's pants are completely unraveled, the battle is over and Burt rockets away like a balloon to make his getaway.

In the fourteenth volume of the manga, which is based on Super Mario World 2: Yoshi's Island, Burt the Bashful is the first boss encountered by Mario, Luigi and Yoshi. Mario and Yoshi try to attack him, but both end up failing. An Egg-Plant tries to assist them by providing them with Yoshi Eggs, but they simply bounce off of Burt. Mario, Luigi and Yoshi then grab and pull down Burt's pants, exposing his private parts. He then turns red of shame and flies away like a deflated balloon.

Burt does not return in Yoshi's Crafted World, but a similar boss named "Burt the Ball", who is a sentient beach ball that looks like him, does appear. He starts his battle by inflating, then putting on his signature pair of pants (which were not transformed). Burt the Ball attacks by bouncing across the stage and summoning Bumpties that push the player off. The Bumpties can be swallowed for ammunition to strike Burt when the boss does his bounce attack. A successful hit causes him to fall, after which a ground pound deals decent damage to him. However, after each time he suffers ground pounds, Burt counterattacks by summoning Beach Burts (via whistle) to send beach balls that deal damage. Once he loses his stamina, which is drained through 3 ground pounds' worth of damage, Burt turns red in shame and flies away to escape. Yoshi then gets the third Dream Gem.

Burt appears in Super Smash Bros. Brawl as a sticker that slightly increases bite attacks for Yoshi, Wario, Wolf, and Charizard. In Super Smash Bros. Ultimate, Burt appears as a shield type primary spirit that lowers the fighter's speed. His spirit battle is against a giant Pac-Man on the Ω form of the Super Happy Tree with increased defense who can deal damage by falling on the player.

Burt the Bashful's cameo in the intro of Yoshi's Island DS. 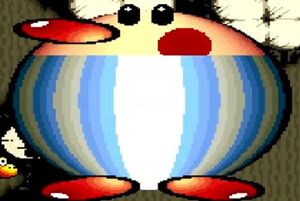 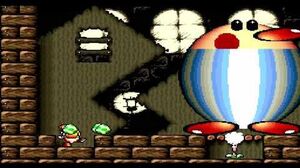 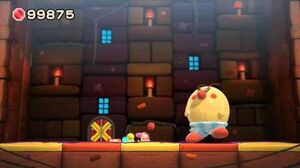