Bushwacker is a fictional supervillain appearing in Marvel Comics. Though he is most often a dangerous enemy of Daredevil, he has come into conflict with both The Punisher and Wolverine as well.

Originally a priest, Carl Burbank abandoned his vows following the drug-related deaths of young parishioners. He joined the C.I.A., which outfitted him with a cybernetic arm and made him an assassin under the codename "Bushwacker", but ultimately he became a freelancer. At some point, an event took place that compelled Bushwacker to begin a war against all mutants. Bushwacker began hunting and assassinating mutants, most often those mutants whose abilities Bushwacker perceived as making them especially talented in "the arts". Bushwacker also claimed that he was paid large sums of money to kill mutants, but this has yet to be verified. Burbank's killing spree brought him into conflict with both Wolverine and Daredevil. Wolverine learned of Bushwacker's activities and began to hunt the killer himself.

At the same time, Bushwacker's wife Marilyn believed her husband was insane and needed to be placed in a hospital. She sought aid from lawyer Matt Murdock (secretly the hero Daredevil). Daredevil found Wolverine fighting Bushwacker, and he would have killed him if Daredevil had not stopped him. Unfortunately, this allowed Bushwacker to escape and continue his rampage. Bushwacker was ultimately tracked down and defeated by the two heroes, which left the right side of his face horribly scarred, and he was placed in police custody.

Later, Bushwacker joined with Typhoid Mary and other enemies of Daredevil in a plan to beat up their common foe. After the completion of the plan, Mary took Daredevil's body, and Bushwacker was left to his own activities.

Entering the Kingpin's employ, Burbank attacked the Punisher, but was left for dead. It was during this time that his wife finally left him. He reappeared in the employ of drug lord Nick Lambert, who hired Bushwacker to kill reporter Ben Urich, who was about to run a story of his illegal activities. Instead, when Bushwacker learned the truth, he allowed Urich to live and to complete the exposé. However, it was Bushwacker that was proved right, as the drug lord managed to bribe himself out of jail. Bushwacker then killed him.

Bushwacker was later freed by Deathlok II from captivity by Mecha Doom.

Subsequent activities brought him into conflict with Daredevil, Nomad, the Punisher, Boomerang, and Elektra. His clash with Nomad was memorable in that was over the life of a baby that Nomad had taken under his care whom Bushwacker believed to be the daughter of Troy Donohue, Burbank's ex-brother-in-law (she was in the fact the daughter of Nomad's foe, the drug lord Umberto Saffilios and a teenaged prostitute). Bushwacker hoped that his wife would approve of his "rescue" and welcome him back into her life. 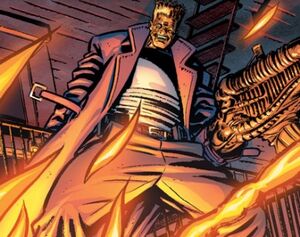 Retrieved from "https://villains.fandom.com/wiki/Bushwacker?oldid=4181265"
Community content is available under CC-BY-SA unless otherwise noted.